Getting “Wet” – Understanding Why and How Women Do and Don’t 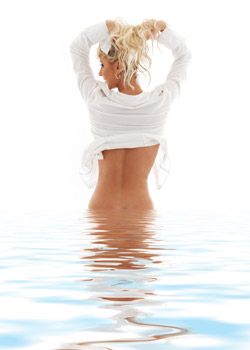 Although in the United States, a woman’s ability to get wet is often valued as a sign of her sexual interest in her partner, appreciation for women’s self-lubricating potential (we are the original self-lubricating beings…) is not universal. In some cultures it is dry sex that is held up as the ideal, and women become smooth about avoiding becoming slick.

Sugar and Spice and All Things Nice

That having been said, it is reasonably well accepted by scientists around the world that well-lubricated sex is safer sex. Female sexual fluids, as well as artificial lubricants, reduce friction during penetration, and this reduces the likelihood of microscopic tears, or even visible damage, occurring during sex that might increase the chance of one or both partners acquiring a sexually transmitted infection.

It’s easy enough to find out what’s in a bottle of lubricant, but what do you find in a woman? As it turns out, it’s all about keeping her in circulation.

Many of the physical changes that take place during sexual arousal have to do with blood flow, and lubrication is no exception. In the same way that a man develops an erection, when a woman becomes physically aroused, her genital tissues become engorged with blood. This not only causes swelling of her breasts and labia, and increased sensitivity of the clitoris and other sexual tissues, but it is responsible for a major component of female lubrication. Tissue transudate—filtered blood, in plain English—makes up a good portion of vaginal fluid. As blood pools thicker and thicker in the surrounding tissues, the increased pressure causes filtered plasma to leak into the vagina… making a woman wet.

Although they say that blood is thicker than water, that is not why female lubrication is thick and slick. By the time the blood filters through the tissue to become lubrication, it is basically salt water with some sugars and proteins added for “flavor”. The slickness of female lubrication is actually thought to primarily come from mucus.

Mucus is produced in the cervix, and the amount and quality of mucus produced varies throughout a woman’s menstrual cycle. Other glandular secretions, such as from the Bartholin’s glands, also make up a small component of vaginal fluids, but they are not thought to play a significant role in lubrication.

Finally, vaginal fluids contain numerous protective factors that help keep the vagina healthy. Antibodies are present to help protect against infection. Even the bacteria that are normally present in the healthy vagina play an important role. The lactic acid they make serves a protective function by keeping the vaginal pH mildly acidic to protect against viruses and other nasty bugs. Peroxide and other anti-microbial products may also be produced by some vaginal bacteria, as well as the vaginal cells themselves, as another way to ward off unfortunate invaders. During sexual arousal all of these protective defenses become diluted by the increased amount of fluid that is made, which makes them less effective. This may seem unfortunate, but no woman would ever get pregnant if her vagina stayed at the normal acidic pH during intercourse… that level of acidity is toxic to sperm!

A lot of people have an instinctively negative reaction to the word “moist.” According to a survey from Salon it is the single most hated word among American women, and I can’t help wondering how much, if any, of that distaste has to do with the amount of pressure we put on women to become well-lubricated during sex.

Although some women can get wet at the drop of a hat, particularly if the hat drop is followed by a hot man in tights bending over to pick it up, there are large portions of the female population who suffer from one or more forms of arousal disorder that affect their ability to lubricate. A 2009 study that looked at a random sample of more than 700 women over the age of 40 found that over 20 percent of them experienced difficulties with lubrication.

In general, arousal difficulties are common in women, and they become even more common with age and the presence of other illnesses. Most population studies estimate that around 15-20 percent of women are affected by arousal problems, and that number may grow to more than 70% of women in the over-60 age bracket. Diabetics also have higher than average levels of sexual dysfunction, and lubrication issues are frequently cited as one of their concerns.

Arousal phase problems can be caused by either psychological or physical issues. Age, changes in hormone status, chronic illness, and even certain medications can all affect a woman’s ability to become sexually aroused. SSRIs, a type of drug used for the treatment of depression, are well known as inhibitors of arousal, as are certain high blood pressure treatments, antihistamines, and prescription stomach medications.

Although everyone who is planning on having sex should keep a bottle of a nice, simple water based lubricant at hand for when they need it, sometimes lubrication problems can be dealt with simply by taking the problem in hand. One reason why many women don’t become sufficiently lubricated for sex is that they are not getting enough foreplay. It takes time for most women to become sexually aroused. It’s also important to remember that a large part of sexual arousal takes place in the brain. If you can’t get a woman’s mind in the mood, it’s going to be a heck of a lot more difficult to get her body to follow.

Because so much of arousal is psychological, mental health issues can play a major role in the origin of sexual dysfunction. Anything from high levels of stress, to depression or schizophrenia, to trauma from a rape or sexual assault, can affect a woman’s ability to deal with sexual stimuli. It can be as easy as a few yoga classes or as difficult as years of counseling with a psychiatrist or sex therapist, but addressing the source of a mental health problem will fortunately often help with its sexual consequences.

Persistent, as opposed to occasional, problems with arousal may also be a sign that you should see your regular doctor. Arousal problems may signal an underlying health issue—such as diabetes or high blood pressure—that needs to be dealt with medically. Changes in hormonal status, from menopause, cancer treatments, or even contraceptive pills, may also have profound effects on your sexual function, and can usually be handled with various sorts of treatment.

Sometimes, however, it is the treatment itself that is the problem. If a new medication seems to be affecting your ability to become sexually aroused in a way that is troubling to you, you should bring that fact to your doctor’s attention. There may be a different drug available that will have less of an effect on your sexual function. Since sexual side effects differ from person-to-person, finding the ideal medication may take a while, but doing so is well worth the effort.

And in the End…

What IS female ejaculate? It depends on who you ask. Some scientists think that it’s primarily secretions from the Bartholin’s gland. Some hypothesize the existence of a female prostate. Some believe that it’s primarily urine. There’s no definitive answer, because there have only been some very small studies where the data has supported all sides. The best guess, of those medical professionals who are willing to admit that female ejaculation exists, is that female ejaculate is not urine, but that in some women urinary incontinence can mimic female ejaculation. Still, a lot more women will need to have orgasms for the sake of science before there is widespread agreement on that fact…

Somehow, I suspect that if researchers ask in the right place, they won’t have any trouble finding volunteers.
Tags:
Views: 3120
Related articles