Student newspaper in Florida is fined and censored.
The University of North Florida’s student newspaper is finding itself in hot water over a photo illustration they ran for a story about the link between HPV and throat cancer. And while it is a little racy, we're still unsure what all the fuss is about.

The front page of Spinnaker depicts a woman in a red bra with the face of a fully clothed man between her legs. Across the man's back, the page says “HPV Grabs You by the Throat.” No “parts” are visible. There’s barely even a hint of cleavage.

We agree! The photograph is an excellent attention-grabber. Unfortunately, the paper has been fined by the student council, which provides funding for operations.

“I believe that the story would have been better off without the cover. It was provocative and controversial, but it didn't add to the story,” said Ryan Winter, a member of the college's media advisory board. He thinks the cover's so offensive that it should be taken off of newsstands.

Way to spoil the party, Ryan. And Facebook. Wha?

Yeah, it seems Facebook agrees. They removed the image from Spinnaker's page and issued them a warning.

You want to see what's so bad? Here: 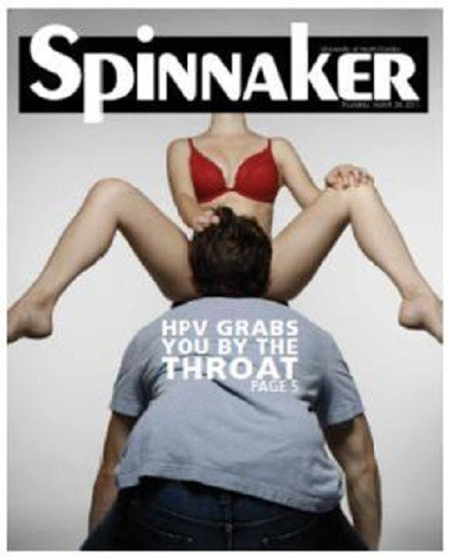