Body Image and Sex: Are they related? 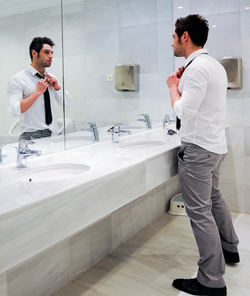 Body confidence is a huge issue when it comes to being sexual. Study after study, in all areas of the globe, continue to show that more than half of women are concerned about their body image. Many men are affected by this as well, with gay men showing even higher rates of body dissatisfaction than women.

"One day I had to sit down with myself and decide that I loved myself no matter what my body looked like and what other people thought about my body."

Typically, women want to fit the ideal of being slender and skinny and men want a more lean and muscular look. Having a negative self image is associated with unhealthy dieting and/or eating disorders, low self esteem, depression and anxiety and a myriad of sexual issues. Obviously, this article will focus on the sexual aspect.

Body image issues are primarily viewed as a female problem. There is no doubt that women are under extreme pressure to look a certain way, but more and more evidence is coming out about how men are under pressure as well. Studies continually show that gay men are significantly more concerned with their body image than straight men though. The media obviously plays a huge role in body issues overall. Magazines, ads, tv/movies... the way we’re “supposed” to look is always in our face. It’s a completely unrealistic image and almost impossible for most people to attain. It makes it pretty damn easy to end up feeling self-conscious and insecure about the way we look.

So how does it affect us when it comes to sex?

Men with a more positive body image are actually more likely to engage in risky sexual behaviour (like sex without a condom). The theory is that these men feel more self assured and invincible. They feel that they can get away with this behaviour.

Women with positive self images, however, are less likely to engage in risky sexual behaviour. The thinking behind this is that they don’t feel pressured to put themselves at risk, since they know they can attract a different guy that will respect their wishes to practice safe sex.

Overall, individuals with higher body confidence end up having more sex, are more satisfied with the sex they’re having and are more comfortable with sexual activity.

One of the main behaviours that comes up in both men and women with low body image is that of “spectatoring”. This is the tendency to focus on the negative aspects of one’s body during sexual activity. They worry about the way they look in that position, what their partner must be thinking, what they can do to hide that body part, and things of that nature. This ends up distracting them from the sexual experience and reduces their ability to gain pleasure from it. Spectatoring is linked to an increase in sexually-avoidant behaviour and sexual dysfunction.

Initially, the idea of spectatoring was developed by Masters and Johnson in 1970 as a way to explain erectile dysfunction. The more the man focuses on his penis and stresses out about getting it erect, the less likely he is to be able to achieve and maintain an erection.

Unfortunately, much more research has been done on the sexual behaviour and function of females as it relates to body image than males. The few studies that actually focus on males show that they are much more concerned with penis size than females. They also believe that females want a much more muscular and leaner look than the majority of females are actually attracted to.

That said, females show a similar pattern, in believing that men are attracted to a much skinnier figure than the majority of men are attracted to. Men with larger penises actually rate their overall attraction and their facial attraction significantly higher than men with smaller penises. There is so much societal pressure to have a larger penis, that it’s no wonder that men have anxiety and insecurities over their penis size and tie it into their overall feelings of self worth and attraction.

Studies continue to show that it’s the perception of body size that matters much more than actual body size when it comes to how people feel about their own bodies. Those that are of a healthy weight still feel overweight and end up with negative behavioural and functional sexual consequences. For women, those who are dissatisfied with their bodies have sex less frequently, achieve orgasm during sex less frequently, fake orgasms more often, initiate sex less often, don’t want to get undressed in front of their partner or have sex with the lights on, are less willing to try new sexual activities and are less confident in their ability to pleasure their partner sexually. These women are less sexually assertive, have higher sexual anxiety and have poorer sexual functioning overall.

Simply not liking the way your body looks can have serious ramifications on your sex life. Is it really worth it? Why are so many people letting society tell them how to look (and therefore how to feel) to the extent that it’s affecting the way they experience pleasure and (in many cases) express love?

It’s time for people to take a deep look within themselves and question why they’re measuring their self worth based on the way their body looks. If you suffer from a poor body image, it’s time to make a conscious effort to start viewing yourself in a positive light and not letting insecurities take away from your sexual experiences. Talk to your partner about how you feel and have them help you see yourself the way they view you. Do things that help you feel sexier. Whether it’s taking a dance class (ballroom, zumba, belly dancing, burlesque/strip... whatever you like!), or buying some new lingerie/high end underwear, do whatever makes you feel good about yourself. Unleash that inner sex beast/kitten from within!

Yes, that’s right. We want YOU to write something for SexIs! See this post for details!
Tags:
Views: 2057
Related articles

Maxxters
I'm a graduate student with my major being focused on human sexuality. I worked as a high school sex ed teacher and currently write for sexpertslounge.com. You can also find me in reddit.com's sex community as a contributor and moderator. I have a huge passion for all things sexual!