Can Divorce be an “Expression of Love?” 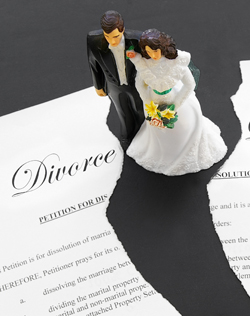 As the author of a column called “Devil’s Advocate” I’m no stranger to causing controversy, but I was genuinely astonished that what I thought was an innocent comment ended up “offending” so many people when I posted it on Facebook.

"“The greatest gift a father can give his children is to love their mother.”"

Within minutes of posting this - what I had thought was an uplifting, positive thought – I had several friends, some of them close ones, message me to complain. They said I was being “judgmental”, accusing them of being ”bad parents” and what I’d written had offended and insulted them.

It took me a few minutes to understand where all this hostility was coming from – but then I realized that there was one thing the friends who had complained all had in common. They were all divorced.

Later, I spoke to a male friend of mine who elaborated on what had offended him so much: The insinuation, he thought, was that because he had divorced his kid’s mother, he was somehow a “bad” parent. Because he was unable to give his children what I had claimed was “the greatest gift” – continuing to love (or at least be married to) their mother – his fatherhood was inferior.

“What was really a greater gift to my kids?” He told me. “Being true to myself? Or staying in a relationship that neither she nor I wanted to be in any longer.”

It turns out my blithe sentiment triggered the ire of a lot of my friends – many of whom had been through the entire process of marriage and divorce, sometimes more than once – in the same number of years that my wife and I had stayed married.

Many of those same friends also had kids. Did this mean that I had accused them of being “bad parents” with the quote I posted?

I hadn’t meant to, but I did feel very strongly that the way parents conduct themselves in marriage was often reflected in the relationships their kids have later in life. So, offensive as I was, I still believed in the spirit, if not the letter, of the quote I’d posted.

It was something reflected in my own marriage, as well. Both my wife’s parents and mine are still together after forty years.

“What you wrote insulted me,” a friend later explained, “because I know my kids are happier now my wife and I are divorced.” He went on: “Surely it’s healthier for them to be able to enjoy us at our best separately, than yelling and screaming and at our worst together?”

And that’s very true - but it’s worth pointing out that the quote I posted was : “the greatest gift a father can give his kids is to love their mother” not “…stay married to their mother.”

Love and marriage are two very different things; and the issue is really how the example we set as parents is almost always reflected in the behavior of our kids in the future.

I see that in the way my wife and I interact.

My wife is an Italian-American, which means she communicates heatedly and passionately through the medium of yelling. To the untrained ear, it’s not easy to differentiate between “serious” yelling (she thinks I’m having an affair) and “casual” yelling (I left the toilet seat up.)
She gets this vocal behavior from her mother, who communicates with her husband in exactly the same way (in her defense, largely because he’s partially deaf). Therefore my wife is the perfect example of how parents teach their children how to appropriately (on, in her case, inappropriately) communicate with their loved ones.

And while my wife mirrors her mother’s behavior, her brother mirrors their father’s. He married a woman who also communicated through yelling – because, just like my wife, he was programmed by his mother’s behavior to believe that this is an acceptable way for a woman to communicate with him.

I get very upset with my wife for her yelling, because I don’t want my own boys to grow up thinking that they should allow women to communicate with them like this, which, coming from my own staid and stuffy British upbringing, I find to be hugely disrespectful. It makes me especially upset when my 3-year-old toddles up to me and asks me “Have you been bad?” because Mummy was yelling at me for something inconsequential.

But when it comes to this sort of thing, I’m not exactly a saint myself. The older I get, the more I observe behavioral traits that clearly came from the way my father treated my mother. I can be cold and dismissive with her, and since I’m the breadwinner and my wife is a stay-at-home-mom (another curious parallel with our parents’ marriages), I often make unilateral decisions that affect the whole family without consulting her beforehand, which is no less disrespectful than her yelling.

These observations made me realize that whether divorced or married, parents still end up inadvertently programming their children to treat their partners in the same way they did.
Which is why I think perhaps my friend was right. Maybe it is better to raise kids separately than remain in an unhappy relationship – and, in doing so, program them to make all the same romantic mistakes you did. Maybe one way a father can really express his love to the mother of his kids is by divorcing her.

But to my mind, that actually makes the “offensive” quote I posted more valid, rather than less.

Perhaps instead of “love” their mother, it should have been “honor” their mother. Either way, the greatest gift a father can give his kids is to treat their mother – whether they’re living together, or divorced – with dignity and respect.

Like it or not, the way we parents interact with each other has far deeper and more significant repercussions for our children than any of us might possibly realize. Living up to that is a responsibility we parents need to recognize and take ownership of.

Be in the know!