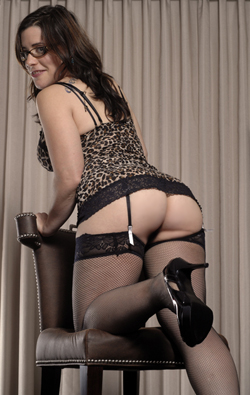 Dave Naz
Age has been on my mind since I'm about to turn 36 on November 10th. I'm often told I don't look my age, and I certainly don't feel my age, but I can't deny that what I want out of sex and relationships has changed since I was 26, and even from when I was 30. Sometimes I think the older I get, the less I know about how sex works — not so much the physical side, but the rest of it.
I used to gravitate toward older men, and still do, to a degree. When I’ve dated younger guys (or older guys who seem a lot younger), I’m highly aware of it. I know age is arbitrary and is literally just a number, not a predictor of maturity or sexual prowess or anything actually useful, yet there is something comforting to me about dating men who are older than me (for whatever reason, when I date/crush on women, they tend to be younger). Maybe it’s because I’m at an age when I am most definitely looking to settle down; both settle my life, my home and career prospects, and settle down to the business of being a mom, with or without a partner. If I’m going to have a partner, chances are someone much younger than me isn’t going to be as interested in settling down like that, and guys who adamantly don’t want to settle down seem drawn to me, and are often hard (no pun intended) to resist.

In her book Is Everyone Hanging Out Without Me? (And Other Concerns), The Office writer and costar Mindy Kaling compares dating boys to dating men, in a piece I found humorous and largely accurate. Kaling writes, “Boys are adorable. Boys trail off their sentences in an appealing way. Boys bring a knapsack to work. Boys get haircuts from their roommate, who ‘totally knows how to cut hair.’ Boys can pack up their whole life in a duffel bag and move to Brooklyn for a gig if they need to. Boys have ‘gigs.’ Boys are broke. And when they do have money, they spend it on a trip to Colorado to see a music festival.” There’s something to boyishness, no matter what a man’s age, that appeals to both my fun-loving side and my maternal side. Boys with floppy hair that I can brush aside, boys who need backrubs, boys who let down their macho guard for even a few minutes will always have a special place in my heart.

What’s funny to me about how my own aging angst plays out in my personal life is that I find I’m less confident about my sexual encounters than I was when I was younger, even though I’m more knowledgeable about who I am as a sexual being, more aware of my desires and, hopefully, more open-minded about my partner’s needs. I’ve found, though, that whereas I once felt utterly confident in the bedroom, now, perhaps because the weight of past relationships and sexual missed connections is something I carry with me, I have to force myself to purge all that baggage when I’m in bed with someone. That’s not always possible, and certainly never easy. Over the last year, way too often I’ve found myself lying awake well into the night next to someone after sex, trying to figure out whether I belong there.

I’m looking forward to being 36, if only because 35 has been overly dramatic and discomforting, a year in which I’ve made some poor decisions, sexual and otherwise, that highlighted for me, my own neediness. Much as I battle that neediness, the fact is, if I slip into bed with a person, I do, actually, need and desire them, and that inherently creates vulnerability. It’s hard for me not to see that vulnerability as a weakness, a liability that can interfere with me pursuing what I really, really want, as Jaclyn Friedman calls it in her excellent new book What You Really Really Want: The Smart Girl’s Shame-Free Guide to Sex and Safety. I may know what I want, for the most part, but when I start second-guessing what another person might think about what I want, both in the moment and in the future, I get nervous. That’s a downside to getting older, because when I was in my twenties, I just didn’t care. If someone judged me or just wasn’t into me, I figured that was their problem, and getting back to that mindset is challenging.

I’m having trouble creating a sexual mission statement, as Friedman advises, because so much of my lust winds up being tied in to what someone else thinks of me, what they want. I don’t consider that entirely negative, but part of my next steps are figuring out ways to combine those two things — what I want and what whoever I wind up dating wants — in a way that’s mutually pleasurable. I know when I err on the side of only pleasing someone else, I do both of us a disservice, because there’s few things less sexy than someone who’s completely needy and subservient (not in the kinky sense, in the everyday sense). I get off on being useful, both sexually and otherwise, but only in the right context, when that aspect of my personality is appreciated for what it is, rather than assumed as a given or overlooked or taken for granted. It’s a sort of maddening part of my makeup because wanting to be wanted and needed isn’t exactly the easiest sentiment to convey. It puts me right back in that sweet spot of vulnerability that always makes me feel like I’m teetering on an emotional precipice. I believe that, like my trainer’s advice when using a BOSU ball, part of becoming a mature adult is learning how to handle that balancing act and not panicking when I tip too far over to one side.

There are definitely moments where I wish I could get a sexual do-over, start over with a clean slate, but since I can’t do that, I want to use what I’ve learned over the last 18 years of engaging in sex with other people to help me get to wherever I’m supposed to be going.
Tags:
Views: 2440
Related articles