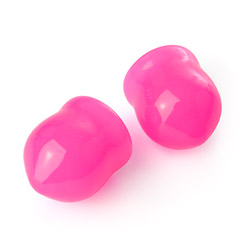 I was highly surprised by how great the Mini Nipple Suckers worked and stayed in place during all kinds of play. They are an unassuming little toy that can add a whole new dimension of fun to your sensual pleasure.
Pros
Easy to use, comfortable, portable
Cons
pink color
Rating by reviewer:
5
extremely useful review

I have to say the Mini Nipple Suckers surprised me. I like nipple play but not strong and clamps or clips, so I had been looking for a toy to try that would add that extra "something" without too much discomfort. These little suckers really work! They provide just the right amount of suction without going too far.

These little guys would be great for anyone curious about nipple play or those who like the added stimulation of suction but nothing more intense. I am sure this product is good for both the beginner and more advanced toy user because of how well they function. Also, they would be great for solo or couple play as well.

This toy is made out of PVC and as such is very smooth and does not have an odor or a taste. They feel very nice against the skin and if not warmed up in a hand before hand can actually be a bit chilly. I did not feel any ridges or anything sharp at all when using these.

I found the texture to be very pleasurable because it allowed me to concentrate on the weight and the suction of the toy instead of the actual feel of the material on my skin.

The shape of the Mini Nipple Suckers is very simple. It is a little elongated cup that is hollow on the inside to fit over a nipple. The biggest design issue I can see with the pair I have is the color. Mine are pink, which is a color I love, but it does make them very noticeable and while I highly suggest trying these on a man, he may be put off by that bright pink color.

Because there are no instructions included with this toy, it took me a few minutes to figure out how to make them work. I found out the hard way the first time that squeezing them too hard will give you the full suction effect. To get them to work properly, you place one over a nipple and squeeze gently. This will provide enough suction for the toy to stay on. From there, you can experiment with the amount of suction you like. I would suggest starting slow if you have never played with this type of toy before. Give it a minute to see what the suction does for you before you squeeze a little bit harder. Also, letting the suction out a little and changing the suction up can make it all the more fun. I also noticed that tapping on the end of them when I had a pretty strong suction adds a new dimension to the intensity. Your nipple size will change with the suction, so do expect to have a nice sized nipple if you leave them on long enough.

The nipple suckers are very easy to clean should you find a way to get them dirty. I just used warm water and soap but you could also use toy cleaner as well. Just make sure you dry them throughly before you store them away, because you don't want to leave any water drops inside.

The packaging consisted of a plastic clam shell packaging that I did not have too much difficulty opening. The packaging is not discreet at all, if left out on a dresser everyone will know exactly what they are. I do not suggest reusing it for storage however, because there really isn't any way to keep it closed. Also, the product did not include an instruction sheet, so one has to experiment to learn how to use them correctly.

I really did enjoy the way these toys heightened the pleasure on my nipples during play. The fact that they stayed on while we did other things and while I walked around the bedroom made them that much better.

I did notice one time we used them, that my nipple had not been perfectly seated inside of one and because of that I had a bit of a bruise that went away in just a minute or two. But, because of that I would note that you make sure your nipple is properly inside these before applying pressure and not to leave them on too long. you don't want to damage sensitive areas.
Follow-up commentary   I still like it 26 months after original review
Now that I have had these for awhile, I have really learned how to control the pressure so it isn't to intense. The rush of sensation when you remove them is still very much there, and it makes my nipples very sensitive for quite awhile after they are removed. If you like nipple play I definitely recommend them.
This content is the opinion of the submitting contributor and is not endorsed by EdenFantasys.com