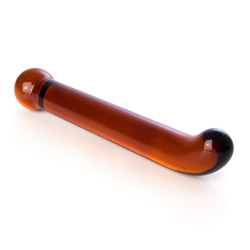 Overall the experience with this toy was a bit of a disappointment and I only used it twice I think. I'm hoping that I just got a badly made one and that the others out there match the picture in the description, because that design looks like it would work very well.
Pros:
Long, not too thick
Easy to clean glass
Cons:
Maybe it was just mine, but the curved end was a bit too "sharp"
Rating by reviewer:
3
No votes for this review
This toy was very confusing. It was one of my first glass toys and I was very excited to use it. The size of it was very nice, long and of a nice thickness. In my opinion, you don't want a glass toy to be too thick or bumpy because glass had absolutely no give to it, and when being used anally, it can cause some discomfort.

This toy, being almost completely smooth had almost no sensation to it.

The first time I played with it I lubed up, and popped the round part in first and... nothing. The initial insertion was nice but as soon as it was in, I felt nothing. I could feel it push deeper inside me, but there was little to no "pleasure" like there is with other textured toys. I was a bit disappointed it that. I popped it out and flipped it over to try the curved tip on my P-Spot. But after feeling it and looking at it closely I was a bit apprehensive about putting it in my butt.

The curved tip in the picture and what was actually on the toy were two different things. The picture shows a nice curved end the same thickness of the shaft. The toy on the other hand, comes down to almost a blunt point. It was almost as if the glass was drawn out a bit too much in the manufacturing process and was not rounded off properly. Maybe I just got a bad one off the line. It wasn't sharp or anything, but it was a bit more of a point that I would want sliding in and out of my ass at a decent speed. I figured I should give it a try anyway and very carefully, lubed it up and slid it in to see if it would work as a P-Spot simulator. If it was any more blunt, it would have been quite good, but the tip was just too pointed. It felt good, but I thought that if I got a little too over eager it could hurt me internally if I was not very careful.

In the end it didn't, but it was enough of a worry to where I couldn't fully enjoy it.
This content is the opinion of the submitting contributor and is not endorsed by EdenFantasys.com

My Ruby G tags
About author