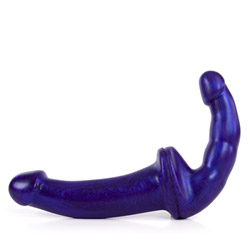 In conclusion, we can conclude that the greatest physical sensation came from the oral service. It was also marvelous looking into each other's eyes, one almost pleading for mercy, as the other demanded more and more satisfaction from tiring jaw muscles and a throat not yet educated to the task it must ultimately perform and perfect.

In short, ladies and gentlemen, we found the Nexus Sr. double dildo to be beautiful, luscious and wonderful! We both simply love it! If your man shows the slightest tendency toward Female Domination or any type of adventurous sex, we say, "Do both of yourselves a favor and order the Nexus Sr. ASAP!". We predict you will NOT be sorry and hope you find the experience every bit as rewarding for your relationship as it has been for ours. Oh, and don't forget a suitable harness! To think, we were once so vanilla!
This product was provided free of charge to the reviewer. This review is in compliance with the FTC guidelines.