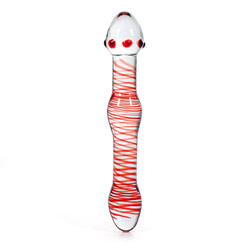 Nubs Or Smooth? You Get Both!

The Red Cyclone Wand by SSA Glass is my latest go-to glass piece. I like to change it up every once in awhile and I'm very happy that I did. Cyclone is double ended so you can use either end for insertion. One of the heads is heavier than the other. The uneven weight may sound like a con but I actually really enjoy it (which I discuss in the review). One of the heads has no texture while the other end has pronounced nubs. I'd definitely recommend it!
Pros
Price, material, double-ended, bulges, smooth head, nubbed head, attractive, temperature play.
Cons
Textured head or opposite non-textured head may not be appreciated by everybody.
Rating by reviewer:
5
extremely useful review
The Red Cyclone Wand by SSA Glass arrived in a thin, red storage bag. The storage bag does not have any text or photos on it. It has a black drawstring closure and does not have any padding to it. Inside, the wand was wrapped in plastic bubble wrap. The red pouch can be used for storing the toy but with it being so thin, you may want to keep the bubble wrap to better protect the toy inside. There are also other storage pouches available here on EdenFantasys that provide better protection. I’d recommend the Don Wands Storage Pouch, especially if you plan on travelling with the toy.

The toy is clear in colour with a red swirl through the shaft and one of the heads. The opposite head has 7 pronounced nubs in the red colour. The raised nubs are not all the same length. The nubs are raised approximately 1/8 of an inch off the head. Some are a bit smaller; most are a bit larger. 1/8 of an inch doesn’t sound like much, but with no give to the material, it can be felt during insertion and can be felt while inside.

Cleaning the toy is simple. You can use soap and water, cleaning wipes, or a toy cleaning spray. With the lack of texture, cleaning only takes a minute. You can also sterilize the toy by wiping it with a bleach/water solution, rubbing alcohol, or boiling the toy. If for some reason you don’t sterilize your toy and you plan on sharing it, be sure to cover it with a condom.

The nubbed head is nice but I don’t use it as often as the other end. Personally, nubs on glass toys don’t really excite me. They are too pronounced and can be a bit painful. The only times I have used the other side of the toy was when I was half way through the session and changed for two reasons. The first is that I was already warmed-up down there so the nubs didn’t bother me as much. Secondly, after a while of using the one end, it will warm up to your body temperature. I like the cold sensation so turning the dildo around is like turning your pillow to the other cooler side in the middle of the night.

I think the Cyclone Wand is a great glass toy and I would recommend it to others. Everyone may not welcome the nubs but what’s nice about the toy is that you have two different ends to choose from- one having texture and the other without. Beginners and advanced users alike can enjoy this toy!

Below is a size comparison photo of the Cyclone Wand with a few of my other glass pieces. The Cyclone is the piece on the very left hand side of the photo. The other pieces, from left to right, are as follows: Gold Laced G, Rainbow Nubby Wand, Hearts Wand, and Blossom G. 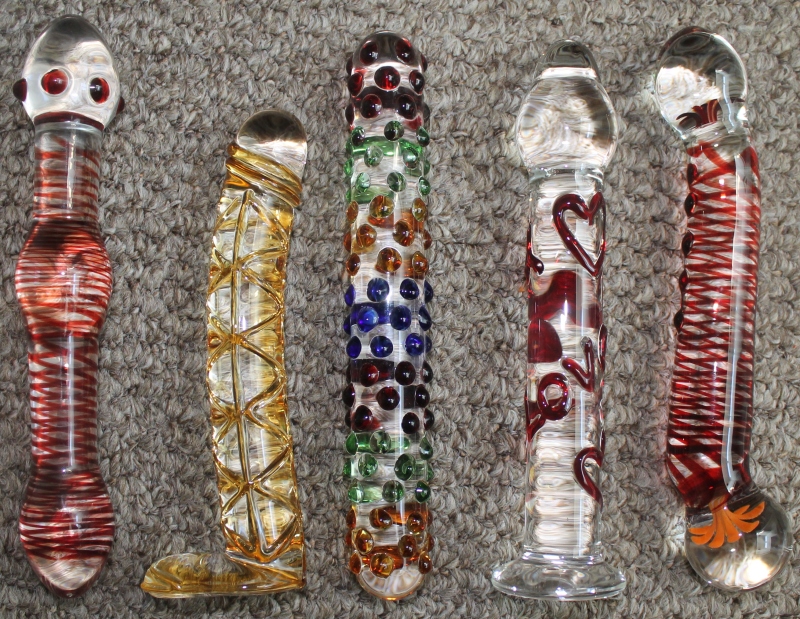 Follow-up commentary   I still like it 5 months after original review
I still really enjoy the Red Cyclone Wand! I love that it's double-ended and has a different texture on each side. I would still recommend this glass piece to others.
This content is the opinion of the submitting contributor and is not endorsed by EdenFantasys.com

Become a Reviewer
My Red cyclone wand tags
About author