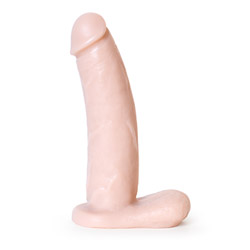 The Bandit Who Stole my Breath Away

The material has a lot of give to it while still maintaining its firmness. The give is the most in the head which is nice and squishy and a bit firmer in the shaft with the give being uniform as you reach the bottom. The design is realistic with a well-defined head and subtle veining throughout the shaft that is noticeable but not distracting. The scrotum is very textured with wrinkles and is on the small side. Despite the small size, the balls function well for extra grip and stability during use. The balls flatten along the bottom to form a stable base for the Bandit stand up on. They also support the heavy shaft fairly well with only a slight droop when the dildo is held horizontally.

Out of the box, the Bandit had no noticeable taste or smell.

There is no disguising the Bandit for what he is and that is a large realistic penis with a small set of balls. So, if you are planning to travel or leave him about well, your gig is going to be up.

For me, the Bandit worked in all the right ways. The defined head was great for stimulation, and the long, sturdy length worked great in various positions. The shaft itself is lightly veined, and the veining can be felt slightly during using but not overly so. Once lubed up, the Bandit has a smooth feel to it, and it doesn't take much lubrication to get things gliding smoothly. The shaft is itself has enough give to bend when you need to but is firm enough for pin-point penetration. The head-to-base diameter is slightly smaller at the head end than at the base making for easier insertion. Those balls, while small and not the prettiest, made for great stability while riding solo without suction cup.

For those wanting a bigger-than-average multi-purpose toy, the Bandit is the way to go although he probably won't be enough for those looking for biggest and baddest of them all. Beginners may have a tough time handling his 1 3/4" diameter and 7" length. For a comparison in size, the Bandit is the same category as the O2 Revolution except that the head is not as large. Those debating between the Revolution and Bandit should be aware that the head of Bandit has more of tampering effect with shaft and the Revolution has a large head to shaft ratio and less tampering in the shaft. So those that want go bigger but are unsure should go for the Bandit.

The Bandit is good for just about every situation. Vaginally, it has plenty of length and girth to make it count, and it is soft enough not to leave any damage. I didn't try it anally, but it does have a good pliability to firm ratio that I think it would stand up well there. When put in a harness, the Bandit stayed erect with only a bit a sagging. He can bend but is not floppy and unwieldy.

The best thing is also the worst thing when it comes to this dildo because the Vixskin material is so soft that it can be more easily damaged than your regular silicone toy. It can fall victim to fingernail damage if gripped too firmly, and when boiling to sanitize, use a gentle hand because the heating makes the silicone more pliable and susceptible to indentations. Also, as mentioned earlier it is a lint magnet but, a quick rinse can take care of that. When dry, the Bandit has some drag against skin but that quick rinse to remove lint is enough to make it feel slick and smooth. When using lube, all you really need is a dime to get things going. While the feeling isn't quite skin, it's not too far off the mark.

Vixskin silicone can be cared for like any other silicone toy. You can boil it, bleach it to sterilze, and scrub it down with soap and water; all is fair game. However when you boil, take caution when handling it. When I first boiled mine, I found that the heat made the soft Vixskin pliable, and I left finger nail indentations on the head. This didn't effect usability, but, still, I like to keep my cocks pretty and clean.

The Bandit isn't small, so I store him in drawer wrapped in a towel to keep him from collecting lint and whatever else is floating about.

Packaging for the Bandit is pretty minimal. He comes in a clear plastic clam shell case that has the product in full view. No guessing as to what you're getting here. I don't remember much being written on the packaging other than Vixen's trade mark phrase. I found the clam shell casing to be bulky so I chucked it; less space taken up this way.