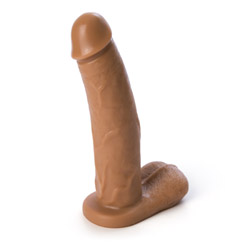 This Bandit is a thief of hearts.

Note: This material is flexible and moves with your body, and the squishiness of the head makes this toy less likely to bruise the cervix.

The box says to treat it like your own skin and honestly, you should treat it more carefully than that. When simulating a blowjob on this toy, I noticed my teeth left a small mark on the head, but not too bad to cause any problems. I have not gotten around to trying to boil my toy, but I am sure if you do, you should take note of how pliable the skin is previous to going in water that could potentially make it even more pliable. Those with long fingernails should also be careful not to nick the material. Make sure to be careful, but remember to have fun and maintain the life of your toy.

As stated before, I noticed this toy, as with all silicone, is a lint magnet. However, a quick dip under the faucet will clean it right up and make this toy feel smooth and slick in the process. I will be keeping mine in its packaging to avoid picking up excess dust and pet hair. Lubricant will also make this toy smooth and silky, and it doesn't take much to get this toy ready.

I plan on keeping my Bandit inside of the box it came in, as in my opinion, it's the best way to store it, and keep it maintaining its quality.

The Bandit came packaged inside of a clear, hard clam shell casing. It has the Vixskin logo on the front and a few details about the toy on the back. Packaging, I would say, is minimal. However, it is fairly bulky, so if you wish to throw the box away, it is recyclable. I, however, plan to use its original packaging as storage. The shell casing is in no way discreet at all.

I cannot express in words how realistic this dildo feels, and had no idea how amazing it would be just from reading the reviews. I had no idea what an amazing quality toy I had coming to me, and I feel that I will always be amazed when I grab this toy for playtime. I'd definitely recommend saving your pennies for this toy, because it is definitely worth the price and the wait. I know I will have fun with the Bandit for years to come with proper care and maintenance. This was my first dual-density silicone, and my first Vixskin toy, and I couldn't be happier with what was sent to me.