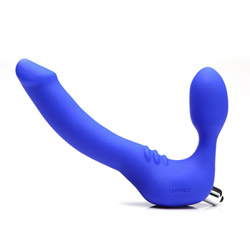 This is a great choice for a harness-less strap-on. The shaft is pretty unintimidating, even to those who have never had anything in their butt before, and the ability to walk around pretending I had a penis was just awesome. The only real downsides are that it picks up lint and other particles like it's going out of style and it can fall out of you if you're moving too quickly.
Pros:
Silicone, Easy to use for both partners
Cons:
Bulb slips out sometimes
Rating by reviewer:
4
extremely useful review

The intended use for this was for a female to wear while penetrating her partner. Of course the uses aren't just limited to that, since it's safe to insert just about anywhere, and comes with a surprisingly powerful bullet that you can either insert into the back end of the feeldoe or use it like you would use any other bullet.

Feeldoe Slim is made of a really nice, plush silicone. Aside from being non-porous and phthalate free and all that jazz, it does have quite a bit of drag to it all over, even though it's really smooth all over. On the plus side, it has no real smell to it whatsoever, at least out of the package. It does have a tendency to pick up and hold onto scents, so if you find that it starts to have more of a scent than you would like, you should wash it really well and then let it air out for a few days. It's also quite the lint magnet, so keep that in mind when cleaning and storing.

The bullet included actually seems like it's made out of metal. It's got a dimpled texture all over and none of the silver looks like it's going to come off anytime soon.

Feeldoe slim is a good size, not huge, but will definitely let you know it's there too. It's a total of 9" from end to end, and you can fully stick a whole 6" into somebody else. The 4 1/4" circumference is a good size for most people. If you're the one wielding this pretty blue penis, you get a fun bulb that's about 5" around and will go inside of you about 3 1/2". With the pretty penis and the nubs for clitoral (or perineum-al) stimulation and a nice flat base at the bottom that holds the bullet, it'll be pretty obvious to anybody looking at it that it's meant to be a sex toy.

The bullet on the other hand, is about 2" long or so, and runs on 3 LR44 batteries. It's got one mode of vibration, and while not the loudest ever, isn't exactly whisper quiet either. Think like those really annoying cell phones that you can hear vibrate from across the room. It's also got a really nice o-ring on it, meaning that you can safely go to town on your partner in the shower as well.

While the Feeldoe slim was designed as a harness-less strap-on, if you don't have the strongest vaginal muscles ever, you might still want a harness.

As for the bullet? It is pretty powerful, at least for something so tiny anyway. Unfortunately because of the density of the silicone, most people won't feel much more than a tickle.

Taking care of this is a snap. Stick with water based lubes, and if you want to use a silicone based lube, make sure you do a patch test somewhere inconspicuous, like the bottom.

Remove the bullet and wash how you want. A spray cleaner can be used if you want, but if either end was used anally, I'd highly recommend a more thorough cleaning with soap and water. You can boil it, bleach it, or run it through the dishwasher as well. If you're planning on sharing during the same session or wanting to go from using it vaginally to anally, make sure to use a condom or boil between uses.

The back gives you a good idea of how to wear it, and gives you the cleaning instructions and a few other tips for how you could use it as well.

This was our first strap-on that didn't come with a harness, and we were pretty impressed with it. I thought the bulb was uncomfortable at first, but after a short while, it wasn't so bad. Removing it (intentionally) almost felt like when I would remove a vaginal exerciser that was just a big bigger than I would have liked. Unintentionally removing it was a lot easier though; relax my vag a little bit, and it would slip right now! Even when I was actively trying to keep it in, once it got started moving around, it was all over and would slide right out.

When using it on my husband, if I moved too fast, it sometimes started slipping out of me, so I found that I ended up holding the base from behind most of the time. It was mildly inconvenient because I wanted to feel like I had a penis, and last time I checked, you don't have to hold your penis in. I'm still looking around for a harness that will let me use this with him in a manner that I won't have to hold it in. Our current harness won't allow that unfortunately.

I was able to use this on myself as well. It was a neat feeling to be able to walk around with my pretty blue penis waving around freely, and then lay down and go to town on myself with it. The vibrations could be felt, but didn't do much more than tickle my fingers while I was holding it.
This content is the opinion of the submitting contributor and is not endorsed by EdenFantasys.com