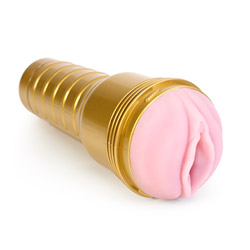 Should Be Standard Issue

This should be a standard issue item for anyone with a penis. While I haven't tried too many different toys, this one is by far my favorite one so far. I wish I'd bought one sooner, as I much prefer it to a hand.
Pros:
Very pleasurable
Gives intense orgasms
Cons:
Cleanup is cumbersome
Noise can be slightly annoying
Rating by reviewer:
5
extremely useful review

I've used a couple of cheap strokers prior to getting a Fleshlight, and my advice to anyone considering the same is to skip the cheap stuff.

It can be used either as a handheld toy or by immobilizing it (e.g. as another user suggested, between mattress and box spring) for a slightly more sex-like experience. The end cap can be tightened for greater suction or loosened for a more free-sliding sensation. Both feel pretty great, and I think I end up using each about 50/50. Aside from standard up/down stroking, I find that getting inside and then slightly twisting it back and forth, so that it rotates around the long axis, is fairly reminiscent of having a tongue moved around the head of the penis.

Most of the reviews neglect what is perhaps my favorite aspect of this toy, which is the ability to thrust in balls deep. I'm not too much above average in size, but many of the more inexpensive strokers are too short for me to do that. Not only is the Fleshlight long enough to accommodate most men, but the cushioned exterior part is very nice for when you want to press in hard.

The material is very soft and pliant. It arrives quite smooth to the touch, although a few cleanings will quickly make it have a much more tacky texture. Applying a dash of corn starch restores the original texture, though I find this generally unnecessary.

The interior texture is a repeating pattern of closely-packed round nubs, each roughly the size of half a small marble. The STU is intentionally a fairly tight fit, but the material is pliant enough that it's not uncomfortably so. All the same, this product does need a fair amount of lubricant to be used. While I think the "stamina training" thing is a little gimmicky, the stimulation is pretty intense. It's almost too intense if I try to remove it immediately after orgasm; I tend to find myself rather enjoyably "trapped" in it for a few minutes after use.

It does have a faint odor, but it's nothing too noticeable or offensive.

Not only is the exterior molded like a fairly realistic vulva, but it also provides a fairly large cushion. As mentioned above, this allows a guy to comfortably (understatement!) thrust all the way in, which I think is a big part of what makes orgasms with this toy so intense.

Shoppers should be aware that this item is fairly large: 10 inches tall and 12 inches around at its widest. The downsides to this size are the increased difficulty in concealing it or traveling with it. The size and shape mean that anybody who isn't completely oblivious will notice it's some kind of sex toy, despite its supposed resemblance to an ordinary flashlight. The upside is that its length will probably accommodate 99% of men, which is something a lot of other strokers can't boast.

The smaller cap can be tightened or loosened to alter the amount of suction. It doesn't change the experience too drastically, but it definitely adds a degree of variability to it.

If used very slowly, this toy can be used almost silently. More rapid, normal stroking will cause some squishing noises, as well as air hissing in and out of the back cap (when tightened) or the cap itself rattling a little (when loosened). It can get mildly annoying, but a little background noise or music easily covers it when that's the case.

As pretty much everyone has already noted, the biggest difficulty with this toy is cleaning it. Aside from rinsing the hard plastic bits, the most important part is to run lots of water through the opening after use. Honestly, it's not THAT difficult, but it is a little annoying when you've just had an earth shattering orgasm and want to descend into a coma for a while. Additionally, it takes quite some time to dry completely on the inside. I generally have to leave it out disassembled on a towel, overnight or longer, in order to fully dry it. This may be partly due to living in an area with fairly high humidity.

As noted above, the texture becomes tacky after washing. This can be restored to its original smoothness by applying a pinch of corn starch and rubbing it in for a few seconds.

The packaging from edenfantasys was a discreet plain brown box. Inside, the Fleshlight packaging itself is a metal canister with some porny-looking woman on it. I found the obviously naughty packaging a little odd, considering that the toy is ostensibly supposed to be disguised as a flashlight. So it's good and sturdy for storage, but not discreet, if that's what you're looking for.

The Fleshlight ships with a plastic rod in the center of it, so there's some rather amusing warnings about removing said rod before attempting to use the product.

I've owned this for almost a year now. It's still amazing, and I use it almost exclusively for solo sessions.
This content is the opinion of the submitting contributor and is not endorsed by EdenFantasys.com