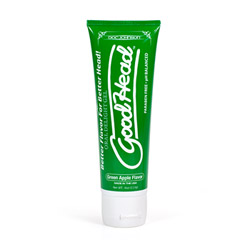 Whilst I wanted to love this product, it did leave a lot to be desired. It would have been better had it not been as numbing, as a desensitized penis is a bit hard to give a blow job to, and it would have been great had it felt like actual ice cubes.
Pros:
Tastes ok.
Helps you deep throat?
Cons:
TOO NUMBING (desensitizes penises a bit with too much)
Rating by reviewer:
2
No votes for this review
This Green Apple good head gel left a lot to be desired. It tasted okay, but made my husband's penis go a little bit numb/desensitized, rather than just feel like ice cubes!!! However, it did help me be able to deep throat him all the way because it made my throat and tongue numb all the way tooo!

This felt similar to any other lube, fairly gel like and a bit slippery, it smelled great, though, almost like a sour apple. It was very easy to get the taste out of my mouth, but the numbing bit lasted through brushing my teeth and drinking some water. To get it off my man's penis, though, was much more of a challenge, he had to take a shower and scrub pretty hard to get all sensation back. The taste was kind of similar to what you expect from candy green apple stuff, if candy green apple stuff ALSO tasted like it had lube in it? It's not an unpleasant taste, but it's not something I would want to taste every day because it gets old quick.

With this product, though, less IS more, the second time we used it, I only used a pea-sized amount and that helped it only numb a little bit, which was much more pleasurable to my man, though he still states that it doesn't feel like it's intended to feel like ice cubes. (The first time I used around a Dime sized amount, FAR too much!!)

I would probably recommend this if your goals are to be able to deep throat your man better, but other than that, if you're just doing it for the ice cube feeling I wouldn't get this product, you'd probably be better off using actual ice cubes. Just remember, Less is definitely more
This content is the opinion of the submitting contributor and is not endorsed by EdenFantasys.com

My Good head tags
About author

Reviewed by TheSlyFox (Eden Writer) Try it atleast once; if you don't like it, you don't have to do it again.
Rank
5.7
wrote 97 reviews
Comments
Make a post
Forum
Thank you for viewing Good head – lubricant review page!
Top