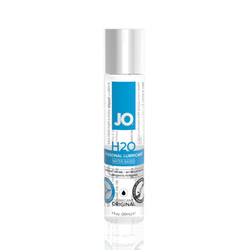 System JO H2O makes for less of a drag

If you want a lube that won't drip, stays in place, and doesn't taste bad, this might be right up your alley. However, if you have a glycerin sensitivity, are avoiding parabens, or need a package that will be discreet about its contents, you'll have to look elsewhere.
Pros:
Thick consistency, Tastes/smells nice, Easy open cap, Little goes long way
Cons:
Some ingredients, Not discreet
Rating by reviewer:
4
extremely useful review

Now, as for the ingredients, this does contain glycerin, so if you have sensitivities or get yeast infections, you may want to pass this one up for one of the great formulas also offered on this site. As for the rest of the ingredients, there's purified water and sodium carboxymethyl cellulose, a common thickener and lubricant. It also contains two forms of parabens. Propyl paraben, which is widely used in cosmetics, lingers in the body, and is the one that may cause cancer.

Methyl paraben, on the other hand, is widely found in nature as a defense against bacteria and fungi in many plants, including blueberries. Methyl paraben is readily absorbed by the skin and intestinal tract, though it is quickly converted into a non-toxic substance, para-hydroxybenzoic acid, and excreted by the body. This form is also readily biodegradable, and plays a role in removing phenols from the soil. Ultimate proof on parabens ability to mimic estrogen, and its effects await further study. So, if you don't want to chance it, I'd suggest limiting exposure, particularly given propyl paraben's wide-spread use in cosmetics and water-based products.

The texture is nice, with some cushioning against another surface, it's enough for me to feel easily during use. I'd say it falls nearly in the middle of slick and velvety. As I've mentioned, this is a thicker formula that stays well, so no more rushing to get it on before it drips off your finger or toy. This also means that spills are less likely, since you need to squeeze the bottle for it to come out. I've found that I need to use more pressure to get it out, unlike thinner lubes that can come out just from me picking them up while it's open. However, it still pours out easily enough, in a manner that's easy to control. So, you don't end up with so much that you'll need to wipe some off to feel anything.

As the water evaporates, it begins to feel thicker and less lubricating, with the little, if any, stickiness. I actually don't feel the need to get up and clean it up after use, since I don't feel any residue with the amount I typically use. It's nothing that a quick wipe with a wet cloth or napkin wouldn't fix.

Taste wise, it's a lightly sweet strawberry-kiwi flavor, with no unpleasant aftertaste. This might make it a good option for those who find flavored lubes to be too strong. As for the smell, it faintly sweet, and it's certainly not strong. It reminds me more of a light fruit scent, such as strawberry, kiwi, or watermelon.

For me, it lasts a minimum of twenty minutes without the aid of my own lubrication, however it has easily lasted an hour or more, and it revives well. I normally don't need to wash it off, and any cleanup is accomplished with nothing more than a damp cloth.

My favorite features are how easily it cleans, how it doesn't stain any fabric, and how easily it absorbs without residue. As far as negatives, there aren't that many. Mainly, I don't like how easy it is to find I have used too much, and I wish the formula didn't include parabens.

This comes in a simple clear container that, from a distance, isn't suspicious. A closer look show the words personal lubricant printed in large silver letters on the side, and the same phrase again in smaller black type on the front. Given this, it isn't really discreet -- anyone who looked could tell what it is. However, the smaller size is nice for travel, and the cap closes tightly. This should ensure it doesn't open in your bag, but I'd still put it in a zip-top bag to be on the safe side.

Wet naturals beautifully bare
$11.04
Follow-up commentary   I still like it 2 months after original review
As of right now this is still my go-to lube. It is good for vaginal use, particularly if you have issues with insertion. This will make it smooth and help cushion sensitive tissues. I think this could be used for more gentle anal uses like inserting a finger or plug but anything rougher likely needs a thicker formula. The one thing I don't like about this is how much of the formula has parabens; it seems excessive to me.
This content is the opinion of the submitting contributor and is not endorsed by EdenFantasys.com

Reviewed by Fodra (Eden Reviewer) Want a discount? Use code WFU for 15% off.
Rank
5.1
wrote 1 review
This review was edited by
Comments
Make a post
Forum
Thank you for viewing JO H2O lubricant – water based lube review page!
Top