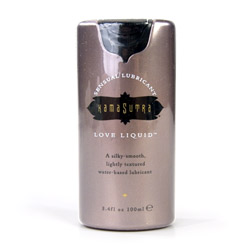 Generally, this is an all around great lube. It's just as it's name implies: classic. It does everything it needs to do and nothing it doesn't. No, it won't make your junk taste like fruit or candy, nor will it make it tingle, cool or warm. It's more expensive than bargain brands but still affordable and lasts forever because a little goes a long way. Most importantly though, it excels at making you wet!
Pros:
Smooth, Silky, No residue or smell, Minimal and pleasant taste, Long lasting, Affordable.
Cons:
Not all-natural or organic, Contains some glycerin though I experienced no side effects.
Rating by reviewer:
4
extremely useful review

Because Love Liquid is water-based, it's also great to use with toys and is totally silicone safe. However, being water-based means that it is very easy to wash off and makes Love Liquid much less effective as a lubricant when being used in the bath or shower. All things considered, it is a very straight forward and effective lube with very few weaknesses.

The ingredients for this product are listed as:

Glycerin is a commonly used ingredient in lubricants and can cause yeast infection or skin rashes for some people. However, the largest letters on the back of the Love Liquid Classic bottle are the ones that spell out "dermatologist tested" and "hypoallergenic." Additionally, both the Kama Sutra website and Love Liquid bottle claim that the lubricant was "formulated without yeast-promoting sugars." Although I was initially skeptical about these claims, I personally have had no irritation using this lubricant. Everyone's body is different though, so if you think you might have a reaction to one of the ingredients, be sure to test a little bit on your skin or use in moderation to be on the safe side.

The texture of Love Liquid Classic is pretty silky, if not a touch drippy. Do NOT squeeze the bottle, because you'll probably have way too much lube on your hands! I find that merely holding it upside down with the cap open for a second or two is enough for just the right amount to escape from the bottle. I did a sort of viscosity test where I put about a quarter-sized amount (more than I usually use for sex) and turned my hand to the side. The lubricant DOES start to drip almost immediately. It is very thin and slick, and you can easily roll the little puddle around in the palm of your hand. However, I notice that when using the product in moderation (just a few drops) to provide a thin layer, it stays put better. For me, just those few drops are usually more than enough to get me slick enough for sex, even on days when I'm feeling particularly wetness impaired. Just a little bit of this lube seems to go much farther than lube from brands like KY and Astroglide.

Love Liquid Classic feels pretty similar to natural lubricant when in use, especially when you don't use too much. After a while it does tend to absorb into the skin and needs to be reapplied, like all water-based lubes. Although I haven't used too many other lubes recently enough to offer precise comparisons of how long it lasts, I do remember thinking it lasted a good bit longer than the other water-based lubes when I first began using Love Liquid. It definitely isn't one you should have to reapply with great frequency. When it does absorb into the skin, I tend to simply feel very well moisturized. It's not at all greasy and doesn't leave any hint of a sticky residue, just silky smooth saturation.

Part of why I chose the Classic version of Love Liquid is because it is advertised as unscented. Smell is usually a really big no-no for me. Even the slightest hints of strange oder can totally distract me and turn me off, be it from a lube, condom, or toy. I'm very pleased to be able to inform you that Love Liquid Classic does have absolutely NO scent what-so-ever. None at all. You could stick it directly under your nose for hours and not detect a thing.

Love Liquid Classic is not a flavored lube, though Kama Sutra does make versions of Love Liquid that appear to be flavored, as well as heating and cooling. There is a tiny bit of taste to Classic, however. I find it very mild and somewhat sweet, and it doesn't taste like anything specific in particular. And for a lube that isn't supposed to be flavored, not tasting like much of anything is good enough for me! Personally, I think it tastes better than most of the cheaper brands and is pretty similar to what most of the higher end water-based lubes offer as well. By and large, I think the way most people taste naturally is much stronger than the taste of this lube, and can also be a lot more bitter. The majority of people who taste this will probably find it pretty pleasant, if not simply inoffensive. At the end of the day, it's nothing to write home about but shouldn't turn anyone away.

As mentioned, Love Liquid is one of the longer lasting water-based lubes I've tried. After dropping a spot onto the top of my hand and rubbing it in a circle with a finger, it took a good while to rub in without any visible lube left on my skin, and it took more than 15 minutes for the skin to loose it's silky feeling and return to it's "normal" state. Again, no greasy and sticky residue.

Because it's a water-based lube, it's compatible with pretty much every material that I can think of off the top of my head. Getting Love Liquid on sheets or clothing isn't a problem either, because in my experience it doesn't leave a stain at all and any visible residue from the lube on the fabric can easily be washed out with some running water or, of course, in the washing machine. That said, I probably wouldn't want to get it on anything that's dry-clean only, mostly just because I have no clue how the dry clean process would affect it.

One thing I don't care for about the lube is how watery/drippy it is. Although I don't have any problem with it when you are careful to use Love Liquid sparingly, if you use too much it has the potential to get absolutely everywhere. I also think it would be better if the lube could have been formulated without glycerin at all, "yeast-promoting" or otherwise.

The packaging of Love Liquid is pretty straight forward. Mine came in a little black cardboard box just barely bigger than the bottle. It seemed fairly discreet, as far as lubes go. Not sure if I'd consider the packaging more or less eco-friendly than the brands that are typically sold without a box but with a plastic wrapper securing the top.

The bottle itself is pretty sleek: a lovely metallic purply silver color with a black cap, which ends up looking pretty sexy compared to many other lubes. The cap of the first bottle I ever got cracked after being accidentally dropped with the lid open. It was pretty miserable because the lube is fairly runny and the crack in the lid caused the bottle to leak. Luckily, it's easy to wash off of basically everything and I never had that problem again with any of the subsequent bottles. All in all, it's a very straight forward bottle with nothing funky going on. Flip the cap, tip it over, let it drip or give it a tiny squeeze. Just remember, a dab will do you!

When the cap isn't broken, the bottle is pretty safe to travel with. The flip lid is easy enough to get open that you can open the bottle with one hand, pushing the cap up with a finger. The lid is mostly tight but all the same, there's no twisting involved and it doesn't require much force. If you want to carry this with other items, I'd be inclined to put it in a plastic baggy or tape the lid shut just in case. Due to the viscosity of this lube, if the lid did somehow manage to get pushed open, the lube would definitely get everywhere. Better safe than sorry.

I have mixed feelings about how discreet the bottle is. To me it seems like a pretty neutral bottle, though the color scheme and lettering come off as a lot sexier than many other brands whose bottles tend to look quite similar to hand sanitizer. Generally though, I don't think many people would give the bottle a second thought if they caught a distant glimpse of it.

After a switch in birth control left me pretty dry and unable to lubricate even at peak arousal, I began a mad search for finding a good lube. The switch in bc also left me somewhat more susceptible to infections than previously, so I had to be careful about lubes with sugar/glycerin in them. I had a fair amount of skepticism about Love Liquid, as it DOES include glycerin as one of its first ingredients, but after roughly two years of using this product, I must say, my fears were entirely unfounded! Kama Sutra touts love liquid as having been extensively tested and formulated with women in mind. Glycerin or not, they seem to have gotten this one right because I never had any problems with it triggering any sort of infection. Go Kama Sutra!

As for my partner... He was reluctant about lubes in general because his experience with them in the past had been pretty unsatisfactory. He complained of bad tastes, funny/distracting smells, sticky residues and that they generally felt unnatural or too unlike natural wetness for him to really enjoy. He's a pretty picky and grumpy sort of guy, so his inability to find anything to complain about tends to say a lot about a product. I consider his inability to find something to dislike about this lube no different. It didn't smell, didn't taste funny, lasted longer and felt pretty darn close to natural. What more could you want? Oh, right...

I must admit that I no longer use this product with much frequency anymore as another water-based lube has recently stolen my heart. But my affections are more out of principle, as the products perform very similarly with the major difference being that the new favorite is all natural and organic, which Love Liquid is not. If you're not in the market for an eco-lube, I'd put Love Liquid at the top of my list.
Follow-up commentary   I still like it 2 months after original review
Still hold the same opinion. Doubt it'll change. I love this lube. It's a great basic and has never done me wrong. Although it's no longer my go-to lube because I "upgraded" to a high quality organic all-natural lube, it's still a marvelous stand by. I used it again recently after running out of my current #1, and it was as great as ever. Trusty little lubricant.
This content is the opinion of the submitting contributor and is not endorsed by EdenFantasys.com