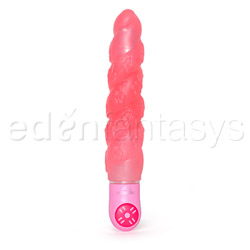 OK, my wife and I received this as a free gift from Eden. My wife just had to give this one a try, even over the ones that we personally ordered. I think it was due to the saying,"Designed by a woman, for a woman". Anyway, on to the review:

The Petite Flowers is a product by Doc Johnson. It is made for both solo and couples play. It is also waterproof, so don't be afraid to use this in the shower, tub, or pool.

This is also part of a line that has daisies and roses on the shaft, instead of just hibiscus. It also comes in six different colors.

This vibe can stimulate the clitoris, nipples, labia and may also be able to touch the G-Spot, due to its flexibility. It would not work well, if you have an all over body massage in mind. It also may stimulate the scrotum and perineum on males, depending on thier individual sensitivity.

This toy is latex and phthalate free. It is also Hypo-allergenic, so anyone should be able to use this one. It is also more porous than silicone toys.

I would have to say this one is for the beginner. Its soft, flexible body allows a few stronger than needed thrusts, without any pain or damage.

I would also not recommend this one for air travel. In a suitcase or a larger purse on a car trip would work just fine.

This particular toy has a disadvantage. Since there is no solid inner core to it, the vibrations are weakened as they pass through the material. This may lead more experienced users to steer clear. The bullet is located near the tip, approximately 3/4 of an inch in. There is also no real vibration felt at the base, even on high.

The noise is also on the quiet side. I would put it as less than a battery operated shaver. You would not be able to hear it through a door, and it is just barely audible on its own under a heavy blanket. Inserted, there barely is any noise to it.

Care and maintenance is fairly simple. This toy takes 2 AAA batteries. The cover must be fully tightened, or it will not operate. Also remember to install the batteries with one positive up, and the other, positive down. Remember to remove the batteries, if you store this toy for any period of time.

This toy is compatible with water based and silicone based lubes. Do not boil this toy! It can be cleaned with soap and water, or if needed, a toy cleaner. Remember to use a condom if you share. I recommend not to share.

Due to the ability of this material to collect dust and lint, I would recommend storing in a plastic zip-lock bag, or you can store it in the original packaging, such as my wife and I choose top do. There are no other requirements for storing this toy, exept to remove the batteries and store it clean and dry.

The box is see-through, so by no means discreet. It lists the manufacture, Doc Johnson, and states it is waterproof, non-toxic, phthalate free, and swirl hibiscus. It also says, "Designed by a woman, for a woman".

There is no directions on the box, or an instruction manual. The only thing on the box is that you must close the battery cap tightly.

When this toy arrived, there was some issue to getting it to operate. Most of that was due to the fact that when they stated tight, they really mean tight. If the cap is a bit off, the toy will not function at all. The other issue, be it a small one, was that it takes a full quarter turn to get this one to even start.

The material this toy is made from, combined with the fact there is no solid shaft inside of it, does weaken the vibrations quite a bit. To us, it was more for getting in the mood, rather than taking my wife to climax.

This was not one that I went out and bought, but this is one of the more unique vibrators that I have now added to my collection.

After the package arrived, I was struck by the claim on the box "Designed by a Woman, For a Woman" and knew I had to test it out immediately. This soft sleeve Petite Flowers Viberator has many textures, that I first had to feel out with my hands. There are the spirals that begin at the tip and carry through the shaft to the control base. The 21 "Hibiscus Flowers" start on the towards the tip and spiral down, each one raised. I was amazed at the fact, you can actually bend it at the middle to a 180 degree angle. It is very flexible, but yet when you apply pressure to the tip, it seems sturdy. The material has a "squishy" effect to it, especially the middle. The tip is where the bullet is located and also where the strongest concentration of vibrations are located. You can feel the vibrations down the shaft, but the decrease considerably by the time you hit the middle and very faint at the base, just above the plastic control.

After having said all that, I enjoy using the tip for clitorial, nipple, and other sensitive areas during play. Since, there is not much difference between high and low, I don't feel the need to fiddle with the control dial all that much. The textures of the spirals and the flowers gives added stimulation to all these areas, as well.

The material that this is made from, does have quite a bit of resistance to it when pulled across the skin, so I think lube is a good recommendation when using for the above stimulation.

Again, I think this would suit the first time user or inexperienced user. The advanced users would probably be disappointed in the vibrations that it puts out and that the speeds are not varying by much.

This is a pretty addition to our collection, but I don't see us pulling this one out continually. This will probably be used more when I am feeling that I need to have a "I feel pretty, oh so pretty" moments.
This content is the opinion of the submitting contributor and is not endorsed by EdenFantasys.com