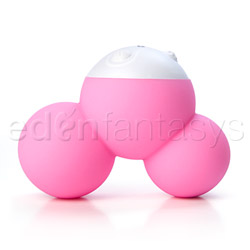 A Must-Have if You're Looking for Something Different!

Although not THE top dog in the powerhouse of vibrators, it is definitely a runner up contender. Its unique design, dual motors, waterproof, rechargeable design and selection of speed and patterns make for a refreshing addition to almost anyone's playtime!
Pros:
Adorable, unique design. Two motors. Click N Charge. Waterproof. Fairly powerful vibes.
Cons:
Buttons can be hard to push. Turbo boost vibrations are flat.
Rating by reviewer:
4
extremely useful review
I had not bought a new toy in quite some time. After acquiring a decent collection, all the new ones I got seemed fairly similar to another I already owned. In truth, most were just plain disappointing. We stuck to our few tried and true favorites and I was happy with that. Until I saw this awesome little critter. Even before I read that it was by Fun Factory (one of my favorite companies), has the Click N Charge technology and has TWO motors, I was hooked!

This adorably unique toy arrived packaged separately from the charger (which is interchangeable with all Fun Factory Click N Charge products). The vibrator was tastefully packaged in a neat window box so the actual product is viewable. The rest of the box touted the usual blurbs about what makes this product a must-have. Inside the box was the product, a small sample of toy lube, a catalog booklet and an instruction booklet written in probably every language spoken on Planet Earth. Best of all, getting to the toy did not require a hacksaw. Two pieces of plastic simply pull apart and your new little toy is in your hands!

As you can see from the photos, the toy is a cute little product with three connecting balls. It fits nicely in the palm of your hand, being about 3.5" long and 1.5" wide. The smaller size may make it difficult for those with larger hands (including most men) to hold onto firmly for an extended period of time. The center ball contains the controls and the other two balls each contain a separate motor. The white control part feels like it's made of hard plastic. The remaining colored portion is made of 100% soft, squishy, velvety silicone.

Now down to the nitty gritty. This is one vibrator that works a bit different from your ordinary vibrators, so you might want to take a couple minutes to sit down and read over the instructions before using it (it may take several minutes to find your language in the manual). Right off the bat, I noticed that as soon as you pick up the toy, the buttons illuminate, presumably so you can actually see what you're doing. It has the usual + and - buttons as well as a flower-shaped button which is the boost button. As usual, pressing the + button increases the vibrations and pressing the - button decreases the vibration level. When I hold the + button down, it only goes to a low level. I have to release it and hold it down again to get to its peak level. At this setting, it's a constant vibration. It's nice and rumbly and deep, although maybe not quite as powerful as I had hoped. I think maybe the squishy balls may absorb some of the vibration. Pressing the turbo button briefly only adds the boost while you are holding down the button. Pressing the button for a few seconds puts into turbo mode until the turbo button is pressed again. However, I find that turbo boost flattens the vibrations too much and they aren't as effective.

While in the next program, the lights will blink once every second or so to let you know it's in another program. Then twice for the next, then three, then four times for the last program. In the first program, the vibration switches back and forth between either ball. In the second program, it seems to do the same thing, only faster. The third program seems fairly constant. I can't tell a whole lot of difference between that and the regular, initial vibration. The fourth program is a bit harder to explain - it kind of speeds up and slows down.
Experience
The negatives: One issues I have is that the buttons can sometimes be a bit difficult to press. You sometimes have to push the buttons a few times to get it to switch. Good to prevent accidentally bumping and changing the vibration, bad when you WANT to change it and can't. I also don't find the turbo boost button very helpful. No matter which program you use it in, it switches to a constant vibration (which I've said before I find to be fairly flat). And again, if you're looking for a powerhouse of a vibrator, this one is pretty powerful, but not as much as I had hoped. (I find that the Fun Factory MiniVibe Spring has more intense vibrations.) I'd say it's more powerful than most, but not as intense as some. If you like insertable toys, this probably isn't for you. I never use toys internally, so this isn't an issue for me at all.

The positives: A very unique design (super cute and not OBVIOUSLY a sex toy - good for those of us with little ones or nosy older kids). If you've run the gamut on traditional vibrators and are just looking for something different to add to your playtime, this is definitely a contender. Having the two motors allows you to place vibrations at two different areas such as clitoris and vagina or vaginal and anal area. Of course, this depends on your particular anatomy as far as exact fit and placement goes. While not completely silent, you definitely won't hear it through a closed door - and probably not even across the room. It is nice for not only genital stimulation, but for overall massage as well. Super easy to clean with water-based cleaner or soap and water.

Would I recommend this? Yes, for anyone looking for something a bit different for external stimulation.

Will this stay in my toy box or go the land of unused toys? It will definitely be staying in my toy box. Although not my favorite, it's one of the top four toys that we do use regularly.
This content is the opinion of the submitting contributor and is not endorsed by EdenFantasys.com

My YOOO tags
About author