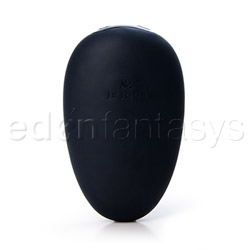 Other MiMi Generation I reviews

The first thing I commented on when I opened up my Mimi was that she is so soft. Her velvety silicone has almost no drag to it right out of the box, and she simply glides along your skin with a water-based lubricant (not that that's necessary; the Mimi will have you soaking wet in just a few minutes!). Remember not to use a silicone-based lube, because the Mimi is a toy you don't want to ruin.

I detected no smell or taste from the Mimi, even fresh out of her packaging. After use, there is no smell and she retains her silky feel. I don't know if I ever want another toy with a different material.

The size of the Mimi makes her perfect for both brand new and advanced users. She fits snugly in the palm of my hand, and stays delicately in place between the lips of my vagina.

This is the only area where I have a complaint about my Mimi. And I'm sure you've heard it before: her buttons are hard to press, often leaving indents in the skin because of the sheer force needed to turn her on and off. That being said, I have no other complaints about the Mimi. And, to me, if that's the only thing I can find to bitch about, it's still a damn good toy.

When the Mimi is on or charging, a little light turns on in the shape of a heart. It's Mimi's little way of acknowledging that you're using her and it's just adorable, to boot.

Now, on to her functions:

The Mimi has something for everything. She's damn near silent and can get herself all the way up to five vrooms without waking your sleeping roommate, which is a plus.

The Mimi is a very easy toy to maintain. After use, give her a warm rubdown with some soap and water, then store her in her luxurious box from Je Joue, and she's good to go for another run tomorrow. Beyond cleaning up so great, the Mimi is also a 10/10 on the Eden material safety scale. She's latex-free, non-porous and phthalates-free, so what's not to love?

Also, the Mimi comes in a lovely, ribbon-tied box that makes her perfect for gift giving and keeps storing her easy and discreet. She's low maintenance and pretty? Shit, sign me up for another one!

Now, here's the fun part. I wasn't crazy about my Mimi until tonight. Feeling frisky right out of the shower, I decided to lay in my bed and have a little me time, and I wanted my Mimi to be involved. I was just starting to get into it when my bedroom door swung wide open and my mom came in to say she was headed off to bed.

Thankfully, I had the covers pulled up when the door opened, otherwise she would have known what was going on. However, I didn't have enough time to shut of my Mimi and I was mortified. Until I realized my mother and I were holding a perfectly normal conversation and she had NO IDEA that I had a buzzing vibe nestled between my legs.

It killed the mood, but at least I know the Mimi can stand up to being walked in on.
Follow-up commentary   I still like it 2 months after original review
Oh, Mimi, you are still so marvelous. We may not play together every night anymore, but you are my trusty standby. I love the way your velvety silicone slides across my skin without any effort, and the silent power of your vibrations. I believe we may need to have some fun, tonight, to make up for lost time.
This content is the opinion of the submitting contributor and is not endorsed by EdenFantasys.com