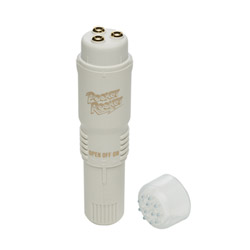 Other The original pocket rocket reviews

Pretty decent vibe to have in your collection

The Pocket Rocket is a good staple if you want to build a collection of vibrators. It's small, discreet, decently strong, and only uses one battery. I broke mine, but I used it quite a lot. I think it would be a better vibe to use in conjunction with other toys or during sex, or for travel, rather than as the only toy you depend on, but that's my personal preference based on how quickly I wore mine out because it was my only toy at the time.
Pros:
Discreet, quiet, sturdy. Strong, holds power for a long enough time, only requires one battery.
Cons:
I wouldn't mind it being stronger, or if it lasted longer, I guess? Also not penetrative.
Rating by reviewer:
5
useful review

The Pocket Rocket is hard plastic. I think it had a strong plastic smell when I first took it out of the packaging, but it was manageable and went away eventually. I personally like hard plastic vibrators because they allow me to apply more pressure to my clitoris, although it does make me a little sore after extended use. I believe the head is a textured cap that you can remove, if you prefer one texture over the other, although I don't think I ever removed the cap from mine, so I can't quite recall for sure.

The small size was definitely very nice. The shape was decent and able to get the job done, although if I held it for a long time, my fingers would get sore. It's not beautifully sleek or anything, but as I said, its small size makes it easy to hide away, so I didn't care that it wasn't the most beautiful thing in the world.

The best part, for me, is the strength you get from just one battery. One battery also powered the Pocket Rocket for a decent amount of time. I think I usually switched out the battery between 30-45 minutes because I wanted the vibrations to stay strong enough. Plus, I was using a 4-pack of rechargeable batteries when I had this, so I could play with it for twice as long as a normal vibrator. It made some noise, but was not so loud that I was worried about people in the next room hearing it. Using it under a blanket also helped muffle most of the noise.

I can't quite remember the packaging. It was not especially modern or innovative in design, but that also wasn't my primary concern when I got this in the mail. I don't remember the detail of the user's instructions, but it was very easy to figure out and use. The only issue I recall having was forgetting which direction to put in the battery, but even that wasn't a major inconvenience.

I used this one summer when I was home from college and far from my boyfriend. I was not afraid to use it when my parents were in the house, and frankly, I used it quite a lot. It broke eventually, after maybe 4-5 months, but during those 4-5 months, I used it quite intensively (like at least 2 hours on average, daily; I know, it was not a productive summer).
This content is the opinion of the submitting contributor and is not endorsed by EdenFantasys.com