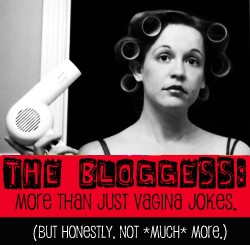 There are more than you think. (Myths, that is. Not vaginas.)
And here it is…the post in which I get to the bottom of The Top 10 Myths About Vaginas:

1. “Having sex with a guy who has a big penis will stretch out my vagina.”

FALSE.
Have you ever seen a horse penis? They’re HUGE. Like, scary huge. That’s where the phrase “hung like a horse” comes from, in fact. Now think about all the other horses you’ve ever seen. Have you ever seen one and said, “Oh my God! LOOK AT THAT HORSE’S ENORMOUS STRETCHED-OUT VAGINA!”? No. You haven’t. Because vaginas are elastic.

FALSE
Pockets make the best pockets. Vaginas are too upside-downy to make for good pockets. That’s why we don’t keep our car keys in our vaginas. Think, people. Also, yes, “upside-downy” is a word. Starting now.

3. “Some vaginas have teeth that will bite your penis off.”

FALSE
Although technically? Body modification is getting more extreme every day. Huh. You know what? I’m moving this one to UNDETERMINED.

4. Some girls have more than one vagina.

TRUE
I saw it on The Tyra Show. Apparently you can have two vaginas and not even know it. Hell, you might have eight or nine in there. Probably not though. It’s a vagina. Not a labyrinth.

FALSE
There are lots of people who don’t have vaginas but still identify as a girl. Some close-minded people insist that only “a vagina makes a girl,” but using that same logic, someone with two vaginas makes two girls. And now we’re fighting intolerance with math.

6. There is an evil leprechaun that lives in vaginas of unmarried women and he only leaves after the marriage ceremony is finished.

FALSE
Wow. Your mother really did a number on you, didn’t she?

FALSE
Have you ever seen a vagina? It doesn’t look like a “V” at all. It looks like a lower-case “w”. But only if you’re using a rounded font. The one I just used there is named “Hobo STD”. I’m not even making this up, y’all.

8. If you rinse your vagina with 7-Up you won’t get pregnant.

FALSE
I don’t know who invented this myth, but I suspect it was probably the guy who owned 7-Up.

9. “Vagina” is the funniest word ever.

FALSE
“Reintarnation” (to come back to life as a hillbilly) is the funniest word ever. “Vagina” is a close second. “Upside-downy” is third.


10. Doctors once removed a seven-pound man from a woman’s vagina.