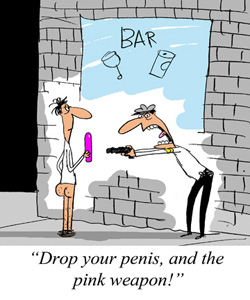 Two officers with Pennsylvania’s Plains Township Police Department were on patrol when they ran into a fellow standing in a parking lot with his pants around his ankles. When they approached the man, they noticed his penis in one hand and something pink in the other. They say he smelled of booze and had bloodshot eyes.

The gentleman tried to walk away from the officers at first, but then stopped to chat.

With his pants down?

The man's name is Robert Matello and he's 49 years old. And he told officers he “was only pleasuring himself” and was “just spanking his own ass.”

One of the officers, unsure what the pink object was, asked the fellow if he was carrying a weapon.

Matello was arrested and has been charged with indecent exposure, open lewdness, and public drunkenness.
Tags:
Views: 2053