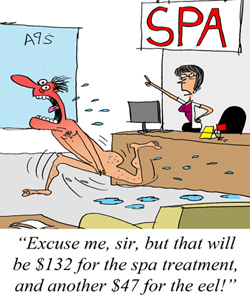 Men: Be careful of exotic spa treatments, okay?
Don’t bathe where there are tiny, slippery, live eels in the water because they might slither up places they have no earthly business being.

This is the kind of advice that should seem to go without saying, and indeed, no one evidently said it to Zhang Nan because one of the tiny eels he was bathing with during a spa treatment in China slithered up his penis and wound up in his bladder.

Sorry: should have put a “Nightmare!” warning before that. Maybe someone should have put a warning on the eels, too. Evidently they are used for exfoliating: the Metro UK says the treatment similar to fish pedicures (which have been banned in some places) in which the fish nibble away at your dead skin cells, leaving you with smoother tootsies. The eels apparently do the same thing … except you’re evidently not just offering your orifice-free feet for them to snack on, or at least Zhang Nan wasn’t. He was lying in the tank when he felt a sharp pain and realized an eel had crawled into his (nightmare alert) urethra.

He tried to (double nightmare alert) pull it out but it was too slippery. The eel was a little bigger than the urethra, but its slippery body helped it lube its way in. Zhang Nan had to have a three-hour operation to remove the now-dead exfoliant from his bladder.