'Tis the Season for: Snow Penises!

And they're ridiculously easy to build, too.
Ah, behold, the snow penis: a time-honored tradition almost as venerated as the snowman itself. While snow penises are a common winter sighting on snow-covered lawns across the world, several of the icy artworks are under assault, as they potentially might lead to traffic accidents, Class A misdemeanors, and Scrooge-ish neighborly complaints.

In Poland, a 17-foot sculpted work of snow-penis art was built a little too close to the road, perhaps—Warsaw authorities blamed it for a 30 percent rise in traffic accidents earlier this wintery month. The frosty dick sat at a busy intersection and police said that female drivers were especially distracted. Probably because it was 17 feet tall, we’re guessing.

In Louisiana, a couple’s finely-wrought snowy genital sculptures had to be taken down, even after police “showed up, laughed and drove off,” because complaints by neighbors had the sculptures being re-investigated as a potential violation of the state’s obscenity laws, which might lead to a class A misdemeanor for someone. 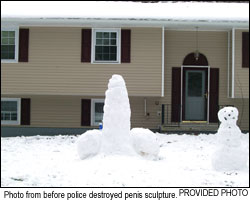 And in New Windsor, N.Y., a snow penis statue was knocked down by law enforcement officers—but no one's in trouble and the creators said they intended to rebuild as soon as the snow wasn’t “too stiff to sculpt.”