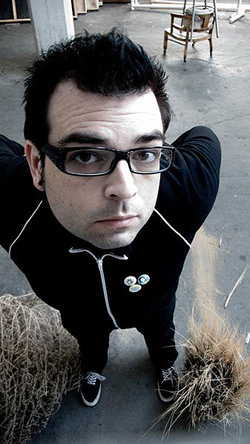 I admire the way young people hook up and date and flirt on the Internet; it’s fascinating. Sex on a computer is some of the safest sex you can have. It’s changing society. Nowadays, so many girls are naked on the Internet and go on to live normal lives. And I think that will be more and more of the norm.

Why aren’t there more male voices in the sex positive conversation?

Haven’t they heard from us enough already? (laughs) The white straight male [is] the most powerful dinosaur on the planet, it’s a very privileged position. As oppression against women lifts, there’s this excitement as each barrier is broken. As a straight man, it’s kind of hard and maybe not always appropriate to interrupt that excitement and be like, “Oh, hey. Let me talk about my dick.”

What’s frustrating that the ideas out there about male sexuality are not mine. But as guy, you get used to the fact that you just gotta take it. Even physically, in a relationship there’s a certain amount of beating guys take, knowing they can’t hit back. That’s kinda how it is in society.

In a breakup, for example, I think women have a lot more coping mechanisms that society supports. Men are expected to not care and move on. I don’t know what’s going on at the Moose Lodge and I’m sure that some of those brothers are helping each other out. But in general, it’s hard to help another man emotionally. It’s a pride thing and a societal pressure not to.

Veronica Hart taught me how to act in this business, how to treat people. There’s always some kind of pressure from whoever you’re making movies for. They want a certain type of sex, harder sex or whatever they think is gonna sell more movies that month. Veronica taught me that I have to be okay with everything. I have to be able to own everything that happens. If I can’t understand it, if it’s fucked up and cruel, I can’t shoot. I stuck to that, and only shoot things that I have some type of a relationship to.

You’ve also noted that the female consumer’s voice is getting louder every day.

In my youth, the idea was that no girl would want to look at a dick—the dick is just lucky to be here. So it’s refreshing for men to finally be objectified a little bit.


The trailer for Mckai’s The Doll Underground

Existing as a male performer has a lot to do with your ability to control your body. You have to force yourself through the situation and make it good. That alone cuts it to a very particular cross-section of the population.

I remember once sitting in my office and getting a phone call about Daniel—Danny Wylde … He’s a very attractive performer and also extremely intelligent, educated young man. On the phone is some guy and his wife. “We like Daniel,” the man says. “Could you get some more shots of his butt? That would be great.” I was like, “Absolutely. I could definitely get more shots of Daniel’s butt.” But as a guy, it’s really hard to have a sense of how to express and celebrate another man’s sexuality.

I’ve always tried to cast guys that women seem to react to, but if there were more attractive guys, it probably would change my films. I think it could probably open things up about celebrating male bodies and attractiveness a little bit more.

Where did you learn about sex growing up?

It was always when it was just the four of us, alone as a family. That’s when my Mom would say, “Look, you guys have to use condoms.”

The other embarrassing thing she did—I’m assuming she probably did something similar with my brother—was made sure I had condoms way before I could get laid. “Man, come on. Don’t jinx me.” What’s a kid to do with a bunch of condoms who’s not getting laid?

I think it’s also a bigger problem in terms of marriage and sexuality. Look at Mad Men. Draper’s wife is amazing. I can’t imagine that his wife wouldn’t be down to have mini-adventures with him, but for some reason, he can’t. He thinks it’s not appropriate. And so it falls apart. It’s the inability to make the one partner both of these things, wife and sexual adventurer. I think both men
and women both want to be ambitious and explore the world in a more similar way.

Famed humorist Will Rogers once noted: "There are three kinds of men: The one that learns by reading. The few who learn by observation. The rest of them have to pee on the electric fence for themselves."

But, just what the hell does it mean to be a man, anyway? In this series, SexIs turns the spotlight on the male of the species to explore where our culture stands regarding male sexuality, what’s lacking from the conversation—and how the questions we aren’t asking effect us all.