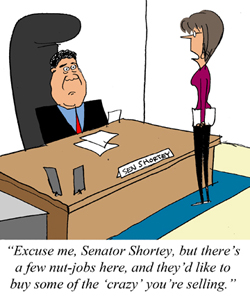 Oh, no! What’ll we do without our Embry-Ohs?
Life in Oklahoma must be pretty good for this to be a serious concern for a public official. Republican State Senator Ralph Shortey introduced a bill last Thursday banning the use of human fetuses in the production of food.

“Federal food safety officials have never heard of such a thing,” reports the Los Angeles Times and an FDA spokeswoman said there have never been any reports of fetuses being used in the production of food. But Shortey read on the Internet that an anti-choice group based in Florida, called Children of God For Life, was boycotting Pepsi Co. for just that reason.

“The boycott backers claim that Pepsi Co. was contracting with Senomyx, a San Diego-based company that allegedly was using human embryonic stem cells in the testing of artificial flavors.”

We should've guessed when they introduced “Amnioti-Cola.”

Of course, Pepsi and Senomyx have denied the use of stem cells in flavor testing, but Shortey's just not buying it. Despite being lampooned all over the web, Shortey is going to revise the bill and push to have it heard in committee.

“I want a serious conversation about this,” Shortey told the Los Angeles Times. “This wasn’t an open invitation for the country to chime in. This was an invitation to my colleagues to have this discussion.”

Just your colleagues, eh, Shortey? What about your constituents?

He's not worried about all the hate he's getting on Twitter and in email, though. He says his detractors are just trying to discredit him.

“The first attack is intended to make that issue or person look ridiculous,” he said. “And I’ve got a thick skin.”
Tags:
Views: 1257
Related articles