Overt Racism Alive and Well at a Kentucky Baptist Church 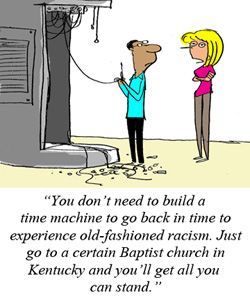 Board votes, 9-6, against participation by interracial couples.
If you’ve ever wondered what it would be like to have a time machine to go back to the bad old days, you can evidently go into some people’s heads and find out.

A group at the Gulnare Freewill Baptist Church in Pike County, Ky., recently voted not to allow interracial couples to become church members or to be “used in worship services” … with the exception, we kid you not, of funerals.

It all started in June when Stella Harville, 24, an optical engineering student, brought her fiancé, Ticha Chikuni, 29, a Zimbabwe native, to the church in June. Stella sang while Ticha played the piano, the Herald-Leader reports. Stella is white; Ticha is black. Stella grew up in the church but isn’t a member.

In August, church pastor Melvin Thompson told Stella’s father Dean that the couple couldn’t perform at the church again. Though he stepped down as pastor last month, citing health issues, Thompson proposed the church go on record as not condoning interracial marriage … though all people would be welcome to attend services there, “according to a copy of the recommendation supplied by the Harvilles.” He also proposed the restrictions cited above.

When the matter was put before the whole church, nine voted for it and six against. Others who were there, the paper says, “didn’t want to take a stand.”

“It sure ain’t Christian. It ain’t nothing but the old devil working,” Dean Harville said.
Tags:
Views: 922