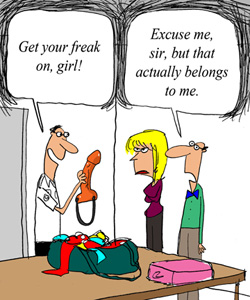 Yes, now airport security leaves notes when they find vibrators in luggage.
A blogger with Feministe is taking the Transportation Security Administration to task. If you've been following the long list of people who have had their Fourth Amendment rights violated in even more obtrusive ways than most, you can probably guess correctly that this is once again about invasion of privacy. If you detect a hint of annoyance, that's because we're pretty flipping frustrated.

Although this case, if you ignore all the reasons it's just tacky, is completely hilarious. Even the “victim” agrees.

“Total violation of privacy, wildly inappropriate and clearly not ok, but I also just died laughing in my hotel room.” said the blogger Jill Filipovic in a blog post entitled “Your Tax Dollars at Work”.

What happened? TSA searched Filipovic's bag, found a “personal item” and left her a little note. Not just the normal note you get when they search your bags. Well, it was. But along the side was scrawled in all caps “GET YOUR FREAK ON GIRL.” The vibe was hardly freaky. It looked very much like this one.

At first, Filipovic was amused. Then she started reading story upon story about people to whom the TSA has caused immeasurable amounts of pain and humiliation with their new sexual assaults. Er, we mean security tactics. Now Filipovic is changing her tune.

Says Filipovic, “I hope they do see the complaint, they'll look into it and remind their staff that going through people's personal belongings is a responsibility that should be treated with some modicum of professionalism.”

Editor's Note: The TSA later reported that it had apologized to Filipovic and that the employee who had written the note had been disciplined and may be fired.
Tags:
Views: 1136