Why Guys Shouldn’t Be Afraid of Sex Toys 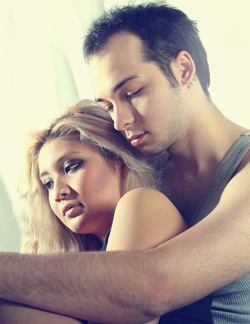 AHubbyof2SexualMidns finds his wife’s confidence in her sexuality sexy!
We men are a masculine bunch. It’s what makes us men. But I can’t tell you how many times I’ve talked with a buddy about sex (yes ladies, it’s a topic that comes up a lot when we’re hanging out watching the game) and if the topic of sex toys arises, they almost always talk about how they don’t like them. Each time, I look at them with an incredulous look on my face. I always ask why they don’t like sex toys, and almost invariably some form of this answer arises; “If I’m satisfying her, she doesn’t need any sex toys!”

That is where our masculinity can really play against us. So much of our identity is made up of how we take care of things and people, and if we admit that something else can also take care of someone, we’re showing some form of weakness. That’s what it seems to me from my armchair psychologist’s point of view. Men are often threatened by things because they don’t understand the “thing”, or they think it can replace them in some form or fashion.

There probably aren’t that many men reading this that are afraid of sex toys. You probably wouldn’t be on this site in the first place! But I am here to tell you there is no need to fear sex toys. In fact you should embrace them. They can be a man’s best friend if he’ll only let them.

My wife and I began using sex toys almost eight years ago. It was early in our marriage and I was the one who suggested it. There would be times where we’d have had sex, and my wife would still be ready for more after I’d ejaculated and would need some recovery time. I mentioned a sex toy as something to bridge that gap between my ejaculation and when I’d be ready again. My wife liked the idea, and one night I went and purchased a rabbit toy for her. We stayed up until 3:00 AM that morning alternating between me and the new toy. It was an incredible evening and one of the sexiest nights we’ve ever had together. If I had been scared of sex toys at that time, we never would have had that experience, and many that have followed.

Sex toys are a great way to change things up in the bedroom and add spice to a relationship. My wife and I have now been married nine years and have a child. If we’re not careful, sex can get boring. Not that we’re doing anything wrong, you just get into a routine. But by having a pretty sizable number of sex toys to choose from, we are able to do different things to bring spice to the bedroom.

A perfect example is during ovulation. My wife stopped taking birth control pills many years ago because of some adverse side effects. When the middle of her cycle rolls around, and she is at her most fertile, we don’t have intercourse. We make this choice because we’re not ready for baby number two yet, believe me. For that week and a half of the month things can get boring if you are not careful. Of course, you can perform oral sex, or use fingers and such, but there is something very arousing and alluring with watching your wife use a toy. My wife loves penetration, and being able to still be penetrated during this time with something resembling a penis without having to worry about becoming pregnant is something that brings her a lot of pleasure. And guys, it’s pretty hot let me tell you.

When your wife is playing with a sex toy, watch her. Watch the movements she makes, the tempo of the thrusting she does, what other parts of her body she touches as she does all of this. You are watching a very intimate moment with your wife, especially once she gets to close to orgasm.

My wife has admitted that sometimes when she is about to orgasm she forgets that I am there and watching. I’m not offended at all by this. She is experiencing so much pleasure she can only focus on what is happening to her at that moment.

And that is also where I pick up some tricks! She’s thrusting the toy in and out very fast, but in a shallow motion? The next time we have intercourse I’ll give that a whirl. It may feel good to me and I suspect that it will feel really good to her. By watching and learning what she likes to do to herself, you can make yourself a better lover.

Another thing I’ve learned by using sex toys is that no sex toy can replace you. When I’m traveling for business, my wife often tells me which toys she’s used, and sometimes I’ll listen as she masturbates over the phone. But every time I get home and we have intercourse again, she reiterates that there’s no way to replace me. I love that my wife feels that way, but is secure enough in her own sexuality – and I am as well – that while we’re apart she can still have a great time with some of the toys we’ve purchased through the years. They say absence makes the heart grow fonder, and it does. But if there’s something stoking the fire while you’re gone, it makes things even better. At least that’s what my experience tells me.

So guys, there’s no need to fear those instruments of pleasure your lady lusts after. Surprise her. Buy her one and design a whole evening around exploring it. She’ll love the gift and be pretty impressed at how open minded you can be.

Yes, that’s right. We want YOU to write something for SexIs!

For this month's guidelines, check out this forum post: Sexy YOU on SexIs? We think so!

Hope to hear from you soon!
Tags:
Views: 2315
Related articles