Kutcher Will No Longer Tweet First and Think Later 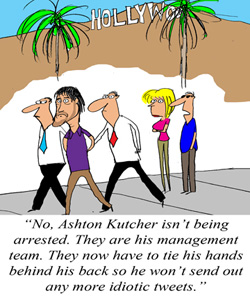 Defending Joe Paterno to 8 million followers didn't work out well for him.
Ashton Kutcher is giving himself a Twitterectomy.

Kutcher lived up to the dumb-but-lovable character he once played on “That ’70s Show,” except maybe for the lovable part, when he sent out the biggest Twitter mistake since Anthony’s Weiner. USA Today reports a tweet that Kutcher sent out on Wednesday night railed against the decision to fire Penn State Coach Joe Paterno, forced out amid the child sexual assault scandal involving a former assistant that has engulfed the university.

Kutcher called himself an “idiot,” admitting he didn’t know story behind the Paterno firing before he sent the original tweet. He deleted the comment and apologized. He is also turning over management of his Twitter feed to his people at Katalyst Media.

“It was a stunning cyber-comeuppance for a celebrity who, with more than 8 million followers, pioneered the very medium that he mangled,” writes USA Today’s Olivia Barker.

Barker also quotes Howard Bragman of Reputation.com, who “says he's had to tell his celebrity clients to run their tweets by him first, or that "they're boring, they're stupid. … I'd rather somebody tweet twice a week and have them be good tweets," vs. twice an hour and watch them ‘run off at the mouth,’ or fingertips.”

Somebody get that man a bullhorn. Or put him on Twitter…
Tags:
Views: 1185