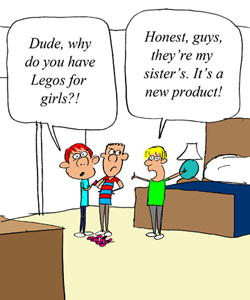 Not if the feminists have their way.
A new line of Legos for girls that will feature more realistic looking figures and a fictional town called “Heartlake City,” has piqued the annoyance of “Whoa! Momma” bloggers for the Tampa Bay Times. The Lego Friends, as the new line is called, is the result of the Danish companies research into what girls would be interested in, including more real features than the Simpsons-yellow Everymen and “interior building and role-play opportunities,” the Sydney Morning Herald reports. They wear pinks and purples and have that girly-girl vibe but their interests still include invention and design. The girls’ toy market was $267 million last year and, the SMH says, Lego would like a brick of that.

“Does anyone feel their feminist hackles rising?” Sharon Kennedy Wynne, a blogger at “Whoa! Momma,” asked in a post about the little Lego girls. It was the Girl Scouts of Greater Chicago and Northwest Indiana who sponsored a First Lego League tournament recently, she reminds us. The Girl Scouts sponsored half the teams and the two girls on the winning team in the competition – who, by the way, built Lego robots – reports the Chicago Herald-News.

Wynne quoted a tweet from internet software developer Michael Labriola “Lego is launching a product line for girls,” he says. “Someone should tell them that they already have one; it’s called Legos.”