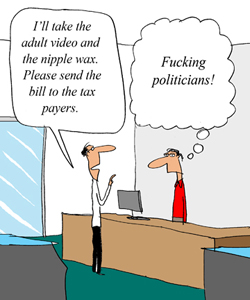 ... With himself, his family and his constituents.
You can learn a lot about people from how they spend their money and even more from how they spend yours. With revelations coming in about his misappropriation of city money, the people of Southaven, Miss. have learned that Mayor Greg Davis likes expensive dinners. He’s a generous tipper. And he’s gay.

The last one came from a review by the Commercial Appeal of Davis’ receipts. Among the mix was included “a charge for $67 at Priape, a store in Toronto that is described by its website as "Canada's premiere gay lifestyle store and sex shop.” The the CA reports Davis visited Priape on a recruitment trip with warehouse developers.

Davis describes himself as a “very conservative, progressive individual.” He’s returned $96,000 of the city funds.

“The only apology I would make to my supporters if they are upset is the fact that I was not honest enough with myself to be honest with them,” Davis told the CA, “But I have lived my life in public service for 20-plus years, and in order for me to remain sane and move on, I have got to start being honest about who I am.”

Not sure which revelation he means, but he’s spot-on about having to be honest to remain sane; any of us who have tried sneaking around know just what he means. Shakespeare said “To thine own self be true.” Someone else said “You can’t ride two horses with one butt.” Same thing.

So what probably looked like a disaster for Davis could be a good thing! Not all revelations have to mean the end of the world.
Tags:
Views: 957
Related articles