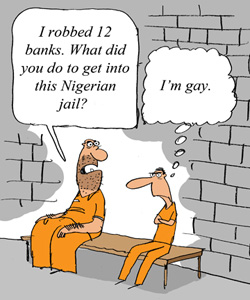 We'd cover it like the rest of the media, saying the law is to ban same-sex marriage and gay clubs, but the fact of the matter is the law reaches much further than that.

Did you get married while overseas, and now you're headed home? You might want to have someone ship your belongings to you. Not only won't you be able to reap the benefits of your union, but you could be arrested. Belong to an association for LGBT folks? You're a criminal in Nigeria, and you're facing up to fourteen years in jail. Attended a civil union ceremony for your lesbian buds? You could get ten years.

Yeah, you read that right. Fourteen years in jail for being with the person you love, and ten for witnessing your gay friends celebrating their love. Suddenly the laws in the U.S. don't seem all that bad.

Erwin van der Borght, Amnesty International’s director of the Africa Program, said in an e-mailed statement that the new law “would target people on the basis of their identity, not merely their behavior, and put a wide range of people at risk of criminal sanctions for exercising basic rights and opposing discrimination based purely on a person’s actual or presumed sexual orientation or gender identity.”