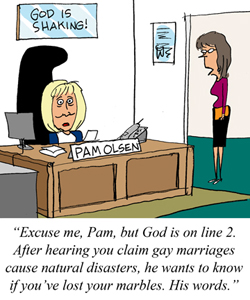 We're pretty sure, ourselves, that gay marriage only causes gay people to be married.
Rick Perry is putting together his leadership team for the “Presidency 5” straw poll in Florida this October and for his co-chairperson he’s picked Pam Olsen. Mother Jones notes that Olsen is the founder of the Tallahassee House of Prayer, a leading anti-abortion activist and someone who believes that gay marriage is the cause of natural disasters. Here’s a quote by Pam:

“God is shaking. If anybody looks at the news and has just seen what's been happening recently with the floods, the fires, the tornadoes, God is shaking. Yeah, I think you have God shaking, sure you have the Enemy shaking, you have both and I don't want to say ‘Oh, that's the judgment of God or that's the Enemy’ … But the reality is God is judging us, and I think it's going to get worse.”

You know, you find yourself wanting to point out that the earth saw its fair share of fires and floods before anyone even heard of gay marriage. As MJ’s Tim Murphy says, “It's somewhat unclear why Texas, whose governor supports criminalizing gay sex, would be punished with raging wildfires for having too high a tolerance for gay rights”—but then you realize that you’re treating what they’re saying as though it’s worthy of consideration and you just feel stupid for getting suckered in.

No wonder God’s shaking. We can’t believe our ears sometimes either.
Tags:
Views: 1101