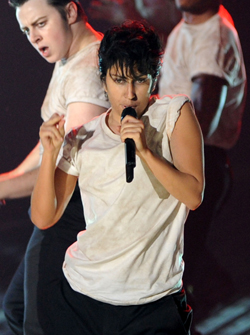 The Queen of Pop became the King of Drag on stage (and off) at the recent MTV's VMA 2011, performing as her alter ego, Jo Calderone, and opened up the world of drag kings for a peek from millions of mainstream Americans. Has she done for women in drag what RuPaul did for men in dresses?
I’m out with a pack of drag kings. It’s late and we are driving over the Brooklyn Bridge. I’m in the backseat and in front are Billy Burg and Jonathon Bitchman — members of drag-king troupe Switch and Play. We’ve just come from a performance and Jonathon is still in muttonchops and cowboy hat. We are headed to a John Waters-themed drag party. “John Waters loves drag kings!” someone says in the front seat — “Well, John Waters at least had drag kings in one of his movies, which is more than I’ve seen anywhere else.”

Lady Gaga’s recent VMA stint as drag king persona, Jo Calderone, may be the first drag king performance on national television. We’ve seen drag queens on screen, Rupaul has been on television for more than 20 years, but there has been no drag kings equivalent. And it’s not for a lack of a scene -- Murray Hill, an accomplished NYC drag king is finally getting some notice by UK television -- still no love in the U.S. Propping myself up between the two kings in the backseat, I’m trying to figure out why.

Drag historian, Joe E. Jeffreys archives early footage of drag performances, and from what he’s found, drag kings were there from the beginning. Storme Delarverie, a drag king (and Stonewall veteran) performed at the Jewel Box theater in the 1950’s. The Jewel Box was a traveling drag show that extensively toured the U.S. from the 40’s up until the early 70’s. “Storme was the MC and The Jewel Box had a gimmick — ‘find the female on stage’ — most of the audience were looking at the female impersonators, trying to figure it out, they had no idea the host was a woman dressed as a man” says Jeffreys.

Even in earlier days of vaudeville, drag-kings were common. Women would take the stage dressed as men to sing songs, tell stories — which were perhaps somewhat off color — and smoke cigars. Simultaneously, in American culture, gender roles were under going a massive change. This era saw women pushing for the right to vote, and even the right to wear pants. “The big sociological question is how did this transfer to the stage?” asks Jeffreys.

In a loud club, I am drinking whiskey with the kings. I shout over the music; “Is the drag king more taboo than the drag queen?”

There are a lot of answers to this. “It’s more disruptive of power,” says Billy, getting at the idea that a man loses power when he dresses up as a woman, but a woman gains power by dressing as a man. “I mean it’s literally aggressive to put on male drag,” someone agrees. The talk inevitably turns to Gaga’s performance and the very reason it was so shocking. She was being sexy in a male way, which registered as shock and horror on the faces of sexy pop women like Katy Perry and Britney Spears. “I can’t think of another time a female pop star — or anyone — so blatantly broke the gender binary on television,” someone says. Definitely, women in pop music and in pop culture are expected to adhere to very specific roles.

According to Jeffreys, the popularity of drag king’ing comes in waves. If the 1940’s and 50’s saw was a time of celebration of drag kings — the 1990’s was the drag king explosion. In New York, Club Cassanova was the first weekly drag king party. Diane Torr offered drag king workshops, for women who wanted to role-play for a night, or just out to have some fun, or were seriously considered a gender transition. At bars in the East Village, Shelley Mars took the stage, in drag, telling sexist jokes — “why do men come before women?” — “Who cares?” before jerking off beer bottles.

“I remember Shelly also had a gay male character with AIDS dementia, that was just so dark and mindblowing” recalls Jeffreys. DRED, well known drag king from the 90's, performed with positive messages like “Society is so concerned with what makes a woman and what makes a man. All that matters is what makes us human… Let your light shine through. Let your fire burn.”

In 1997, John Waters interviewed Club Cassanova’s organizer, Mo B. Dick. Mo points out that, at the time, there were a lot of feminist messages in drag — a critique of men — but the drag kings of color were often more respectful towards men. “There’s too much negativity going around as it is. So they’re more positive,” Mo says. DRED’s message is a shining example. Mo also describes his first drag character — a sailor who slapped boys on the but. Waters says, “You were ‘trade’ that’s what you were. A woman dressed as male trade. That’s very sexy. It’s confusing. See, to me, sex is always the best when you’re confused.”

Classic drag is about performing a gender role. “Most forms of gender presentation on stage are pretty outmoded, the women that drag queens present really don’t exist; the dudes that drag kings present, don’t exist. Who is that person lady gaga presented? Has that person existed since 1955?” asks Jeffreys.

There has been a shift in the last couple decades. Where the kings of the 90’s were often critiquing masculinity on stage, the kings that would follow in the next decade embraced masculinity as much as the criticized it. Drag king troupes formed across the country, popping up all over Midwest — and the kings began to really love their male characters. “I’m interested in how men are vulnerable. And how masculinity can be a burden” says Billy, whose personas include a businessman who discovers he’s gay, and a creepy preacher.

At the John Waters showcase, I am getting an education in the newest school of drag performance. The younger kings are going beyond exploring masculinity and shunning the gender binary altogether. A drag king might have breasts and a phallus or play multiple genders in one show — or a meld of gender roles. As Jeffreys reminded me, sociologists tell us that the first two things you register about anybody in the first three seconds of meeting them is their race and their gender. And maybe that’s why I like this new drag so much, it is shocking.

Talking to the Kings, it feels so frustrating that they have not been able to break into popular culture the same way queens have. “We live in a society that sexualizes femininity, so to have a woman dress as a man breaks those norms and mainstream society has a difficult time seeing women in masculine roles,” says Billy. But also, as I watch the John Waters showcase, which includes gender-queer homages to Divine, and an act where a performer does something unspeakable with a hard boiled egg, it's hard not to appreciate the feeling of being a part of something still off the mainstream radar, something that's still true to its roots, fully underground and untainted by the inevitable effects of joining popular culture.
Tags:
Views: 1657
Related articles