Sexing the Transman: Buck Angel Documentary Explores Trasitioning and Its Effect on Sexuality 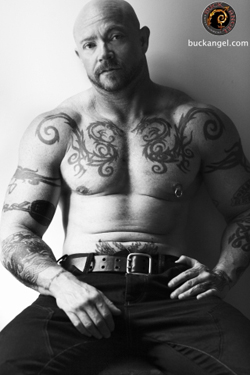 BuckAngel.com
The transman who once loved women, but finds himself attracted solely to men after taking hormones has become LGBTQ lore. There've been few formal studies, but it comes up again and again in discussion; it was a plot-line on The L Word and was even covered as a ‘trend’ by New York Magazine. Now, porn star and trans activist, Buck Angel is making a documentary on the ever-controversial topic.
Daniel is logging into Grindr, “See this is like our version of 70’s gay sex” he says. Grindr is a social networking smart phone app for gay men, which tells users how far away another man is, making hook-ups seamless. Daniel’s photo on Grindr shows off chiseled features and green eyes. “Sometimes they don’t read the profile, and just open with show me your dick.” If these men had read his profile, they would know Daniel is a female to male transman, He’s taken hormones and fully passes as a guy and he also has “original plumbing” — no bottom surgery. “So to those guys on Grindr, I have to explain what that means, that I have a vagina... and I’ve had some guys who are just like oh, okay. I am still interested.”

As the editor in chief of Original Plumbing, a quarterly magazine about the lives of transmen, Amos Mac sees all kinds of sexual behaviors and orientations among the trans male population. But Mac acknowledges that happening of suddenly becoming attracted to men after hormones always garners discussion.

“I remember once I was at the gym with three other transmen who were pretty hetero, but then one of them casually said ‘so I hooked up with this guy. Do any of you ever do that?’ I remember thinking it was so cute, the way he brought it up. I’m much more gay identified, so for me it is not hidden. I am more in your face when I talk about it,” says Mac.

It seems an inevitable part of the discussion is the why — why or how does someone who perhaps once identified as a lesbian, suddenly like men after taking testosterone? There have been some studies on the happening, but not enough to warrant any sort of consensus, let alone general cultural knowledge about what is going on. In his documentary, Angel initially points to the power of the hormones for explanation. And definitely, the effects of testosterone are intense.

Daniel says it was the sudden increase in sex drive that drove him to Craigslist. He was bored at work one day and put up an ad: Transman looking for lunch hour hook-up. He got a response from a guy near his office. He owned a wood-shop, and during Daniel’s lunch hour, the two hooked up in a spare closet.

He isn’t alone in his Craigslist hunting — “I’ve seen other transmen on the site. They say things like, FTM transguy wanted to get plowed! Or FTM guy wants first time with a cis dude! Or Transboy student seeking older guy! Looking for a Silver Daddy $$$!” he laughs. “And there are gay men looking for transmen. Maybe they are interested in their bodies or they are interested in them emotionally. Or maybe they just wanna have their first time too!” says Daniel.

But there is some worry about focusing on this happening as something of a “phenomenon.” “In the early days of prescribing hormones to transgender folks, there were definitely physicians and researchers who saw it as a "cure" for homosexuality. Luckily that is not a prevailing opinion in the US any more, but it certainly does still occur in other regions, such as the Middle East. I do worry though, that reporting on trans sexualities could lead to the unsubstantiated conclusion that hormones "cause" homosexuality, and as of right now, there are no studies that prove a causative relationship between hormones and changes in one's sexuality” says Dr. Tamar Carmel, a, medical doctor who specializes in M to F trans issues.

While Angel’s documentary focuses on hormones, he does not deny that the transition is rife with social and psychological changes as well. Especially with regard to sexual orientation, there is a lot of weight emotionally and psychologically.

Psychologist, Ami B. Kaplan writes on her blog Transgender Mental Health, of the shifting orientation phenomenon: “Perhaps what is really happening in these cases is that individuals are choosing partners more for the complex array of factors that help the individual feel confirmed in their authentically felt gender rather than for their desirability based on their maleness or femaleness.”

And passing in the world as a man, the transman’s relationship to other men has changed completely. “I remember when I began passing fully, and I started getting checked out on the street by men...that was interesting,” says Mac. “You become invisible to the queer girls who checked you out before. Suddenly everyone is ignoring you, except for gay men. I remember really liking their attention, I always wanted that attention. Before, when I would work the door at gay clubs and hang out with gay men, all I wanted was to be accepted by them, I hated being seen as a girl by gay men,” he says.

So, perhaps these transmen are choosing partners who mirror their new male-ness, who accept them — and this takes precedence over gender. Or perhaps, as Angel suggests, they are attracted to the bodies they want, and are spending so much time on getting. “Maybe they are more comfortable with themselves and their bodies now, making them more open to more things they wouldn’t have been before,” says Angel.

The whole thing is still sort of shocking to Daniel, who had a serious girlfriend when he began his transition. “She had it rough. People, who didn’t know I was trans, would say to her — this is your boyfriend? Um, he is clearly gay!” At the same time, he realized, his attraction to women was just fizzling out. It was scary, but he knew this was something that sometimes happens — there was already a path cleared.

According to Angel, who has ties to researchers in Seattle, some unpublished findings show that AIDS is rapidly growing among the trans male population. “Much more research needs to be conducted in this area before we can make any substantial conclusions about the prevalence and incidence of HIV/AIDS in the FTM community. Regardless though, we need to increase HIV/AIDS education, outreach, and prevention efforts in the FTM community” says Dr. Carmel.

The amount of studies on transmen and their health — let alone on changes in sexual orientation — are lacking. “Unfortunately, we don’t have a long medical history on transmen. And we don’t know all the long-term effects of transitioning with hormones. This is the first wave of discussing it. But the more we are documenting this history, the better it will be for the next round” says Mac.

At the colorful parties Mac throws with the Original Plumbing gang in Brooklyn, party-goers identify in all kinds of ways — gender neutral, gender queer, drag queens who like trans boys, gay trans boys who date trans women, plain old LGBT is so last decade. Truly, among the younger set, all of this just seems to matter less. Daniel, too, says that maybe he will go back to liking women again, and that wouldn’t be a big deal. It all jives with Angel’s take-away — “Well, you know what I really think. It’s just that sexual orientation and sexual behavior is way more open to change than any of us want to admit.” While Lou Sullivan taught us that gender and sexual orientation are separate, perhaps the gender queer generation and these trans men are teaching us that sexual orientation — as well as gender —can also be fluid.
Tags:
Views: 3207
Related articles