Solicitation: The Secret Life of Johns, Part Six — If It Wasn’t A Secret, Would It Exist? 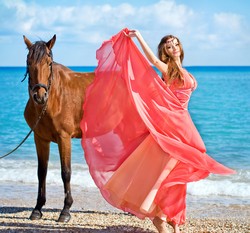 Would there be sex work in a sexually non-repressed society? It's one of those philosophical questions to wax over, in all of its unicorn-like glory. After all what does “sexually non-repressed” society even mean? Would we all be polyamorous...wearing fig leaves for clothes?
After interviewing dozens of men who buy sex — my answer is yes, there would be sex work in a sex-positive society. The men I interviewed taught me that sex workers who are working from choice are doing important work: psychological, therapeutic, spiritual even. This aspect of sex work has been celebrated in different ways throughout history, and would be respected in my idea of a “sexually free culture.”

But when I posed the question to the “Johns” themselves — some had a different idea. The knee-jerk sex positive reaction seemed to be that sex work would not exist — because there would be room for everyone to have partnered sex, since sex is important to everyone's life. “Everyone would be having sex, because we would all probably be polyamorous and open” was what I heard — but to me, this is clearly a myth.

What does sex positive really mean?

Sex positivity is about saying no as well as yes. Sex is good and healthy, but no-sex is too. Human sexuality fluctuates and one can go through periods (or sometimes all of life) being less sexual, or even asexual. Being truly sex positive is honoring this. In this idyllic society, I see no reason why one couldn't find a way to navigate a relationship in which two partners had differing needs and wants around sex. Relationships are based on much more than sex, after-all. This is one of the themes I heard over and over again with the men I interviewed. So many men said they see sex workers because they are no longer having sex with their partners.

Stephen, a buyer I interviewed, whose partner is okay with him seeing sex workers, says, “I imagine in an open society, where casual sex was permitted and not considered a threat to a primary partner, monogamy might be rare. I imagine that, at least some stage in their life, people would want variety and sex work could be an easy way to have that be available.” The services of sex workers could be a one of many healthy ways to navigate this.

Historically, this isn't a new idea. In Renaissance Europe, royal and upper crust marriages were all about bloodlines and politics; it was well accepted that one experienced lust and passion through courtesans. In ancient Greece, the speechwriter, Demosthenes said, “We have courtesans for pleasure, concubines to provide for our daily needs, and our spouses to give us legitimate children and to be the faithful guardians of our homes.” These may not be the musings of a sex-positive society, but the Greeks were curiously open about sex work as a pillar of society.

Because different people have differing sexual needs, in any world, one would go through periods without primary partners — or any partners at all. And for many of the men I talked to, this is the very reason they sought sex workers. In some interviews, men who felt their virginity was a burden reported feeling much more confident after seeing sex workers. This too has had a place in various cultures throughout time, where it has been accepted that young men gain experience through older women — often sex workers.

While women have not historically had many options, it is interesting that sex work has offered women different statuses in different cultures throughout world history. In ancient Greece, women sex workers were given rights other women weren't — they paid taxes and were sometimes influential women in society. In Japan, during the Edo period, sex workers were known for their “sophisticated” conversation and some were known as celebrities. Their fashion and art often set trends for wealthy women in the culture.

It’s About More Than Just Getting Off

Luke, a buyer, tells me that seeing sex workers has made him feel like more of a complete person. “I feel much more balanced, much more at ease with myself. I am no longer prone to depression. I have come to love and appreciate women more than I did before.”

He was one of the handful of men I talked to who couldn't even talk to women, and got over this initial hump (all puns intended?) by seeing sex workers. Chris Atchinson, the researcher behind the Johns’ Voice study also saw this pattern, “For some men, commercial encounters are their only source of sexual contact, of physical contact, of intimate contact. For some, commercial sexual encounters are the only way that they can actually learn to be with a woman because of personal insecurities, lack of confidence. Their interactions with sex workers allows them to even think of forging a relationship with a non-commercial partner.”

This could not be more intensely or drastically captured than in Matthew. Being born with cerebral palsy, Matthew grew up believing sex was just something that was not going to happen for him. “Disabled people's sexuality is more than erased — it's destroyed,” he explains. “When I was 14, I, of course, knew I didn't look the same as other people, I didn't move the same. And the media put together such a narrow perception of what is considered sexy. Not even the normals can get near it!”

When he first saw a sex worker at age 19 that things began to shift for him. Matthew, like Luke, reports emotional and psychological benefits to seeing sex workers. But he says he also noticed physical benefits “My doctor notices after I've been on a date. My circulation improves, and I am more relaxed. If I am given the choice between taking Valium or this, I obviously choose the one with no hangover or side effects.”

Sex Work Can Be Sex Positive

Feminist arguments against sex work are based in the idea that in a sexually non-repressive society, there would be no sex work because sex work, by its very nature, is oppressive to women. This argument often ignores that fact that men are sex workers too — 20 percent of men in Johns’ Voice identified as gay or bisexual. But further, as many women continue to claim their right to choose sex work as a valid career, it’s hard to argue that sex work always oppressive to women.

When I ask Atchinson if there would be sex work in a sex positive world, he says. “Sex and sexuality are used as a violent means for marketing, it’s in front of us on a daily basis and yet we actually never have real conversations about human sexuality. The availability of commercial sex both for men and women should be there for individuals that need it. To me, as long as the services are being sold and bought in a consensual manner between adults — and the environment is set up to promote as much equality as humanly possible — who is being harmed?”

In different societies, sex work has existed — in and outside of capitalism. There have historically been religious or spiritual sex work — like the sacred sex workers in Mesopotamia who had property rights, or those working in temples in India or as captured in Ichpuchtli, the Aztec Goddess of sacred prostitution. Today, in the Western world there are sex workers who offer “erotic body work” which is physically therapeutic sex work. There are sexual surrogates, who work to help people overcome mental sexual issues. The work of sex workers is not only hard work; it can often be psychological, spiritual and mental work. Talking with the buyers, it becomes clear that not all sex work takes place as a result of sexual oppression or exploits it’s participants. In a hypothetical Uptopian sex-positive society, “the oldest profession” wouldn’t disappear, but would become safer, more acceptable option and it’s participants more respected.
Tags:
Views: 1465
Related articles