Solicitation: The Secret Life of Johns, Part Five — What About The Wife? 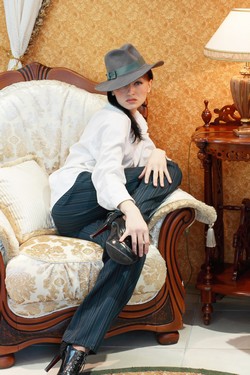 Prostitution hurts marriage, doesn’t it? This has often been used as an argument against sex work — it’s not only demeaning but endangering to unknowing wives. But, this isn’t an argument about the morality of sex work — it’s about the morality of cheating. Still, when talking to Johns, I had to ask: How are the wives actually affected?
And for women who know their partner sees sex workers, what do they think about sex work and how do they feel about their partners seeing sex workers?

Kari met Stephen at his art opening, he’s a photographer and she was immediately captured by his work: dominant, erotic and yet vulnerable. She also learned, he was polyamorous. “I felt strongly that he was offering exactly what I was looking for in a relationship, especially with respect to being open and non-monogamous.” The couple now shares an open relationship in which Stephen is able to see sex workers and Kari is okay with that. “He was honest from the beginning and I was always positive about sex work, so I was open minded.” Despite the shady media image, people fall in love with “Johns” too.

In the John’s Voice survey, 78 percent of men said they hide their sex buying and 63 percent specified they hide it from a partner. There’s a real stigma in being “The John.” Many of the guys I interviewed explained they saw sex workers because they weren’t in relationships. But, because of the stigma they carried, it is harder for them to find or stay in relationships. Only 4.6 percent of buyers said they felt they could trust talking to a partner about sex work.

According to Serpent Libertine of SWOP, seeing sex workers can often be better than the alternative, “Many of my clients are married and I think seeing a sex worker is much safer than having an ‘affair’ or hooking up with someone in another manner, because sex workers understand and respect boundaries. Whereas a person in a non-paid relationship might not be inclined to.”

Kissing Stephen goodbye to a secondary partner or a date is different for Kari than sending him off to a sex worker. “If he meets someone socially, like at a party, and is attracted to her and they connect, then the possibility of a more ongoing connection exists. That is still okay, but just more complicated, with respect to our existing relationship, than it would be if he was with a sex worker,” she says. Stephen also sees it as different, “One partner I had kept saying ‘so far I don’t have any problem with you doing this, but I don’t understand why you want to do it.’ Because really, in most cases, the sex itself is not great sex. I mean, to me, great sex is when you are in a very powerful intimate exchange with your partner. That’s something you can’t get from sex work.”

Kari can’t imagine putting herself in the shoes of someone whose partner was seeing a sex worker, but didn’t know. “I think people always know when someone is seeing another person, especially a sex worker. There’s an energy that becomes a part of you, that you carry with you. Even if your partner doesn’t ‘know,’ they do on some level. Ask any woman or man that’s ever been cheated on and they tell you they ‘had a feeling’ that something was going on.”

Cheating on a partner is unfair and ethically shaky. And a majority of the guys I talked to had partners, but not open relationships. I had to ask: “Why are you seeing sex workers? What is going on with your wife?” The answers I got fell loosely into a grouping of: 1. We don’t do it anymore, 2. It’s natural to want to stray, and 3. After so many years there is no excitement. Serpent hears this too, “Relationships evolve and sometimes a marriage becomes less a sexual relationship and more a partnership or platonic friendship. Many men I've met don't want to end their marriages, but they also don't want to push sex on a partner who has no desire for it.”

Kari and Mona are very rare cases indeed — but there are some women who go a step further. Not only do they know their husband sees sex workers, they come with. According to one male sex worker I interviewed, this is suddenly very popular, “A woman will call up and make an appointment — they tend to be less graphic in their requests. During appointments she might watch or join in. Rarely do I have full penetrative sex with them and if I do, their male partner is usually involved in some manner. It is interesting, the increase I’ve noticed in this type of appointment.”

But, back to the original argument against sex work, that these men are endangering their wives. Of course being sexually monogamous is going to be a better way to protect against STI’s than being open, but sex workers do get tested. “Sex workers nearly always insist on having safe sex. It's maybe the folks who just “hook up” on a regular basis that are more likely to give someone an STI. And as we're seeing in these high-profile sex scandals — Schwarzenegger, John Edwards,” Serpent explains.

Perhaps the bigger danger for women is that their partners may get arrested or imprisoned. For Mona, what also gets factored in, is the safety of the sex worker. “ I’ve learned that there are many women and men who enjoy working as sex workers and that many people do it out of choice. I’ve also learned that there’s a nasty side to the industry and sometimes its not always apparent whether participants are doing it by choice, so one should be careful. The only thing I feel ‘bad’ about in all of this is when women are sex workers by force, and it may not always be obvious whether this is the case or not, particularly in poorer countries.”

It seems that relationship wisdom always comes down to the same thing: communication. We already know that there are people who have learned to incorporate multiple partners into a relationship and make it work. The stories of Mona and Kari prove that this can also include sex workers. With the growing trend of couples seeing sex workers together, comes the question of sex work as a marital aid. It beings new curiosity to the question of what sex work would look like in a sexually free society — and whether or not we would have it.
Tags:
Views: 1601
Related articles