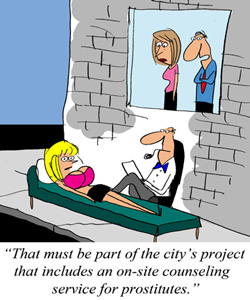 This sounds like an upgrade, but taxpayers aren't necessarily buying it.
The “seedy Sihlquai kerb-crawling district” just behind the main railway station in Zurich, Switzerland, is a problem —all politicians in the city seem to agree on that. How they plan to relocate the district to end prostitution in the area, however, is a bit of a bone of contention.

The city had planned to relocate the red-light district to Alstetten, on the outskirts of the city, and use public funds to set it up, replete with services from counseling to sex stalls.

The Local reports that the “so-called “performance stalls,” complete with parking spaces and alarm buttons, would be the first of their kind in Switzerland if the project is accepted by Zurich voters. The facility would also include an on-site counseling service for prostitutes.” The city parliament voted overwhelmingly (74-30) to ask for a loan to finance the plan to the tune of $2.8 million.

The Swiss People’s Party, however has gotten enough signatures for a referendum on the project, which it considers not to be a good use of public money. Officials like Ruth Anhorn of the Swiss People’s Party in Alstetten see prostitution as a private business that shouldn’t be publicly financed.

The new district was scheduled to be operational in 2012 and some are afraid the referendum will slow down the change and keep the Sihlquai district— which has caused concern about sex trafficking, safety and STDs— in business longer than they would like.
Tags:
Views: 1189