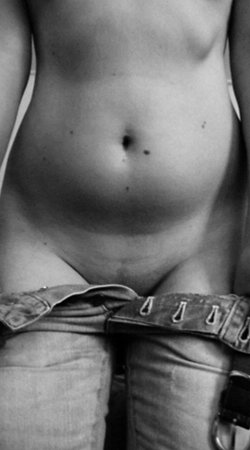 http://abetwist.deviantart.com
Everyone knows that penises change shape when they're aroused, but did you know that your vagina changes shape too? Penises aren't the only body parts that grow!
Everyone and their neighbor knows that penises get erect and swell with blood when a male is aroused in order to penetrate a partner, and it secretes pre-cum for lubricant. Isn't it incredible? Erectile tissue, special glands, all of those amazing things that make sex so fascinating and fun. While it's totally common knowledge that penises do those things, did you know that vaginas do similar things? Most people just don't know because you can't see it, it's internal!

- Once you begin to play, your vagina almost immediately begins to secrete lubrication internally. Depending on the person and the situation, the body begins to secrete the natural lubricant between 10 and 30 seconds after play, but getting aroused can trigger the production as well, hence the term "getting wet." The amount produced varies depending on the person and how aroused they are.

- When you're not aroused, your vagina is only about 4" long and 1" in diameter. Sounds similar to the size of a flaccid penis, doesn't it?

- When you are aroused, your vagina lengthens and grows to about 6" long, and the vaginal opening swells tighter to help encourage a male to ejaculate. Think about the ratio of an unaroused penis to a hard one. The growth amount is about the same!

- The pelvic wall (or kegel muscles) can be worked out to achieve a tighter vaginal opening and help ward off incontinence! Your kegel muscles line the lower part of your pelvis and contract during orgasm, but you can voluntarily contract them to work them out or tease your partner.

- During arousal, your clitoris and hood engorge with blood and swell to almost twice its unaroused size. Though a bigger clitoris doesn't necessarily mean more pleasure, it may be easier to stimulate. It can gain size with regular clit pumping and/or testosterone creams!

- Your Skene’s glands, which are located around your urethra, produce female ejaculate! They contract and squish (or squirt!) out female ejaculate during orgasm. Some are located so close to the urethra that the female ejaculate simply builds up in the urethra and bladder and is expelled during urination instead. Some Skene's glands are so small that they don't produce enough to be noticeable over the vagina's natural lubrication, and it has even been said to be absent in some individuals.
Tags:
Views: 9386
Related articles