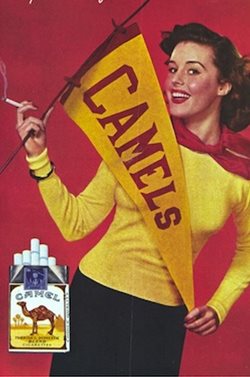 author's collection
Sex and cigarettes - the history and mystery of the smoking fetish.
I have to admit, it took me by surprise. As long as I have worked alongside Marcus, he has been almost evangelical in his loathing of smoking. I do mean evangelical, all hands wafting fresh air in front of his face, pointedly opening windows if there’s even a whiff of tobacco in the air, and furiously pontificating on the dangers of second-hand smoke, even when the nearest puffer is on the other side of the street.

So, when he asked me if he could join me on my lunch break, knowing full well that a good twenty minutes of it would be consumed by my getting a nicotine hit or three in the parking lot across the way... yeah, I was surprised. I was even more surprised when, before we’d even crossed the rod, he asked if I had a cigarette.

At first I thought he wanted it for himself, and a shadow crossed his face when I offered him one. “No, I meant for yourself.” I probably looked at him more strangely than I intended to, lit up - and I swear he sighed happily. Which, much later, I discovered he did.

Marcus is capnolagnic, and perhaps stranger still, he’s a nicotine-free capnolagnic. A non-smoker with a smoking fetish.

It’s an odd one, isn’t it, and probably not one that gets that much coverage any longer. The anti-smoking brigade has seen to that, and if you want to mull the irony for a moment, how bizarre it is that consenting adults can discuss and indulge almost any kink they like, from flagellation to electrocution, and listeners will nod, “whatever floats your boat.”

However, smoking is such a social no-no now that even acknowledging you like a quick puff now and again can see you ostracized from society. Some companies can even dismiss you for being a smoker, because of the strain it places on the health insurance bill.

Being capnolagnic is not the same as being a smoker. In itself it poses no health risks, unless, of course, you are at all wary of the effects of second-hand smoke. In which case, it probably isn’t a fetish you would want to entertain. Or maybe you would. A lot of fetishes, after all, demand the pushing and even removal of certain barriers and conditioning. Well, this is just another that falls into that category.

The fetish itself is primarily a visual one, and appears to be rooted in Victorian and Edwardian (19th/very early 20th century) society’s disapproval of women smoking. It has nothing to do with health. It was a sign, it was said, of low morals; of loose virtues. The only women who smoked in public, it was believed, were prostitutes and ladies of similar standing; to do so, then, was an act of open defiance, even rebellion, that the early organizers of women’s suffrage were very quick to pick up on.

Their struggle, after all, was not simply for votes. It was for equal rights in all arenas, and that included shaking off the shackles of what was and wasn’t considered ladylike behavior. Anybody who doubted the effectiveness of their methods was then promptly shaken from their complacency when Alice Roosevelt, the President’s daughter, was asked to leave the lobby of a Chicago hotel after lighting up a cigarette. Management thought she was a hooker, because who else would smoke in public?

So, the smoking woman was a powerful woman, a determined woman, and an elegant woman.

Or maybe she was a hooker. That delightful French phrase tailler une pipe (literally, “cut, or make, a pipe”) derived from the secret signals of 19th century prostitutes who would signal their availability (and their willingness to fellate a client) by hand-rolling a cigarette between their fingers, and doing so as slowly and seductively as they could. They would then lift it to their lips, light it and inhale deeply and visibly; this meant they also swallowed.

A powerful, determined, elegant woman who swallows? The fascination is becoming clearer by the moment.

The queen of the smoking fetishists was Greta Garbo. In 1927’s Flesh and the Devil she caused a mighty stir in the scene where she walks up to the officer (John Gilbert) to request a light for her cigarette. As he reaches for his matches, she removes the cigarette from her mouth and places it into his. Then, when he finally strikes a light, she blows it out. Tame by modern standards, but the movie’s audience whooped and cheered the entire sequence.

However, he also points out that “The imagery was still making sporadic comebacks as late as the mid-1960s How To Be Pals,” suggesting that old habits die hard.

In these instances, the insertion of a lit cigarette into a vagina (filtered end first, don’t worry) is probably little more than the stag movie makers simply seeing how far they can take an idea before the audience loses interest - a practice, of course, that remains common today, as anyone who has wondered why modern porn stars enjoy spitting up one another’s asses will testify. Such actions have nothing, or very little, to do with sex; they are simply attempts to go further than anyone else, and maybe there’ll be enough like-minded people out there to transform your invention into a full-bodied sexual practice.

The pack-a-day pussy is one of the ideas that didn’t take off. However, capnolagnia remained (and remains) a dignified, refined, and essentially solitary pursuit in which the sight of a woman sitting, smoking - whether she’s aware she’s being viewed or not - is satisfaction in itself.

Those same studies hypothesize that capnolagia suggests an interest in oral sex on the part of the male viewer, but we can probably overlook that - a guy who likes blowjobs. What a shocker! Whether or not it indicates that the smoker shares a similar interest has, sadly, been left unsurmised. Perhaps a woman who smokes is more orally inclined than one who doesn’t, but there are enough non-smoking fellatrices (and, contrarily, chain-smoking “get that thing away from my face”-ers) out there to render the discussion moot. And, apparently (because we are talking about human nature here), there is a sub-section of enthusiasts for whom the damage caused by cigarettes is itself the root of the fascination - so-called “Black Lung Fetishists,” although one imagines they’d have a very long wait for any kind of gratification.

Advertisers played their part in popularizing capnolagnia. All those ads we remember from the 70's and before, pushing new brands of elegant cigarettes at women and illustrating them with glamour girls sucking hard on a menthol death stick? They weren’t only aimed at women, you know. I once came upon a scrapbook on eBay, comprised of nothing but vintage women’s cigarette advertisements, and watched in astonishment as the bid price rose towards three figures. It may have sold to an innocent tobacciana collector. However, my guess would be otherwise.

Madmen notwithstanding, however, the 21st century is a bad, bad time to be a smoking fetishist. No longer can they sit in a quiet bar, getting their kicks from simply watching their fellow drinkers puff away. Rare is the movie in which a girl will do a Greta Garbo, as the anti-smoking bandwagon deletes even the suggestion of cigarettes from most mainstream productions. Seldom are they approached in public by a pretty little thing who poises her Newport between ruby lips and softly asks, “do you have a light, please?”

There is a thriving underground, however, and in the absence of any academic or otherwise informative links to offer in my bibliography, I’ve included a few links to it below. Smoking fetish fiction has a well-established place on the internet, and there are Tumblr sites that also are dedicated to nothing but “Smoxploitation” movies. In these movies, beautiful women simply smoke provocatively, and these sites and movies have an avid following, while more hardcore delights have also been catered for. Finally, some diligent digging on the tube sites can usually turn up a few “smoking blowjob” clips; a scenario which really must represent the best of both worlds to the confirmed capnolagnic.

It certainly did for Marcus.
Tags:
Views: 1746
Related articles