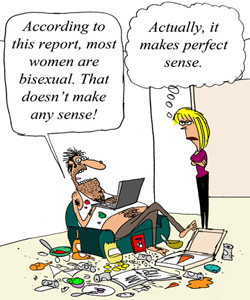 At least they are according to a study from Boise State University as reported by YourTango.com on Shine! According to research on heterosexual women, 60 percent were sexually attracted to other women, 45 percent had kissed a woman, and 50 percent had fantasies about the same sex. The story cites the close emotional bonds of women, which can morph into more romantic feelings and the cultural sanctioning of women in love, i.e. Lady Gaga’s bisexuality and the ease with which we can “ogle” other beautiful women.

It also cites a story on YouBeauty.com detailing research by Lisa Diamond, Ph.D, of the University of Utah. Diamond followed a group of women who were attracted to other women and found “how sexuality develops over a lifetime.”

The most important part about the phrase? The idea that sexuality isn’t static and the responses these women gave that showed how true that is.

Diamond has followed up six times so far with the group and each time asked them to label themselves as lesbian, bisexual, heterosexual or unlabeled. YouBeauty’s Nadia Goodman reports:

Not that surprising … after all, as you age everything gets more elastic. Your skin. Your waistbands. And your ability to appreciate all that love has to offer.
Tags:
Views: 2021