“Donorsexual” Ordered to Stop Giving Away His Sperm 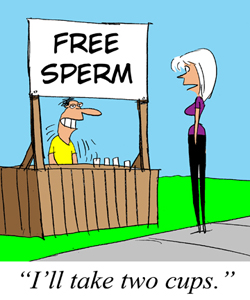 It would have been okay if he were having sex.
Sexy people havin’ sex, they’re everywhere, aren’t they? They’re probably right there in your mirror. It’s getting so an adult who’s never done it before is actually the most interesting dude in the room. Especially when they’ve managed to produce 14 children without ever having had sex, making the Virgin Mary look like a bit of a slacker.

Trent Arsenault, a 36 year-old Silicon Valley computer security specialist and self-proclaimed “donorsexual” has never had sex but has generously donated enough sperm to childless couples to be a dad 14 times over, according to the Huffington Post (with video). To say he’s never had sex is not to say he isn’t a sexual creature. Obviously you have to be doing something to get that kind of fertility rate and Gawker revealed last month that Trent likes upload videos of himself jerking off into a cup like this one.

The FDA has issued him a cease-and-desist order, saying that his free sperm bank doesn’t “take the legally required precautions to prevent the spread of communicable diseases,” according to the San Jose Mercury News, which covered the story in December.

Arsenault appeared on Anderson Cooper yesterday and Radar Online reported that he also met one of his biological children for the first time.

“I’m just extremely happy that she’s healthy and in a loving home. I hope she has the gene of compassion and that her parents nurture that,” he said.
Tags:
Views: 2022
Related articles