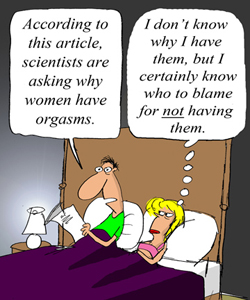 We're not going to let it bother us, though.
Why do women orgasm? Almost sounds like the set-up for a joke, doesn’t it? “To get to the other side.” But scientists take the question seriously and there are various theories of why the big O exists, i.e., that it boosts reproductivity, helps in bonding or is a by-product of evolution, like the vestigial male nipple. New Scientist reports that a new study seems to have made the question even murkier.

Researchers measured “orgasmability” —susceptibility to orgasm—in pairs of opposite sex twins and siblings, contending that if the by-product theory is correct, similar genes would underlie orgasmic function in both sexes and be more similar in sets of opposite sex siblings than in unrelated people. The researchers queried just under 5,000 sets of twins and siblings, asking about the time to orgasm in men and the frequency and ease of orgasm in women. The results showed almost no correlation in orgasmabilty between opposite sex twins and siblings, which would show that “genes that influence orgasmic function in men are not the same as those in women,” said researcher Brendan Zeitsch of Queensland. So this would count against the so-called “by-product” theory.

Contrarily, though, they found that “same-sex identical twins had more orgasmic similarity than same-sex non-identical twins and siblings,” which shows that genes do play some role and could support the by-product theory.

We appreciate the concern but a little hedonistic voice within thinks that we’ll just go on enjoying them without asking why.
Tags:
Views: 1629