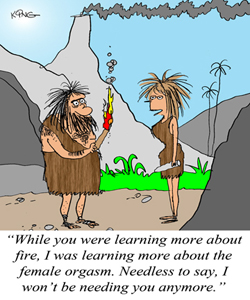 And now we want to go see her in “Hysteria.” Who wouldn't?
You remember the controversial flick Secretary, starring James Spader as the dominant boss and Maggie Gyllenhaal as the masochistic secretary? We're not exactly sure who we'd rather be in that scenario. Seems like a pretty hot situation all around.

But that's not all Gyllenhaal doing with the female orgasm. Sunday night, Gyllenhaal narrated an episode of Curiosity on the Discovery Channel about ... you guessed it! The female orgasm. The lovely actress was chosen specifically because of the aforementioned roles. For who better to tell us about the wonders of the female orgasm than a woman so outwardly comfortable with her sexuality?