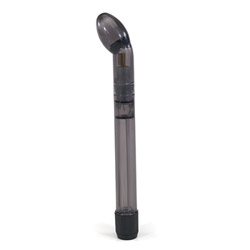 First impressions were not good, not good at all. The hard plastic of the toy felt cheap in my hands and the bulb end of the massager was smaller than I had expected. Thank goodness I took the time to get this thing ready before my husband got home from work. I don’t know how long it took me to get it to vibrate, but it was infuriating. No batteries came with this, so I had to go dig around for two AAA batteries. Once the batteries were in place I turned the dial on the battery cap… nothing happened. I removed the batteries and tried again… nothing. I finally ended up smacking the toy on the palm of my hand until it finally started to buzz.

The vibrations felt good to him and he enjoyed the stimulation in his butt, however I couldn’t find his prostate with this “prostate massager|Prostate massager - Anal Toys Forum.” I figured I was just doing it wrong, so I handed it over to him. Several minutes went by of him putting different angles on it, twisting it, moving it around, back and forth, but no matter what he did, he just couldn’t seem to reach his prostate. He finally gave up for that night and we decided we’d try it another day. After two weeks and about 8 attempts, we have given up on using this to stimulate his prostate.

Also it is quite difficult to keep this turned so the angle is pointing the correct way. His muscles turned it so it was pointing towards his back instead of his penis. My husband also had this problem while using it himself.
Follow-up commentary 3 months after original review
I wish I could change my star rating, because this toy has lowered itself to a 1 star product. We have attempted this again a couple of times, and always come out with the same result. I don't like it for a G-spot toy as the shaft isn't curved at all making it uncomfortable to even get the head to my G-spot, let alone stimulate it. Plus the small head means you need to know exactly where your G-spot is, or else have a rather large G-spot that is easily stimulated. It doesn't make a very good prostate toy for the same reason of the head being too small. The other major gripe is that the toy turns a lot while in use, and this makes it impossible to stimulate anything while it is facing the wrong way. A finger is more effective than this toy.