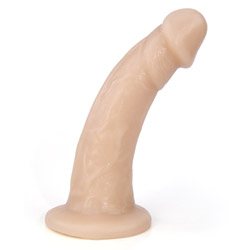 Once You Go VixSkin...

The Mustang came packaged in a clear plastic tube. The first thing I did upon opening it (aside from squishing it and smacking it against my face a few times!) was to sanitize it in boiling water for three minutes. It's probably not necessary, but you never know. The Mustang is so soft and squishy that I watched the toy the whole time, afraid it would melt. It didn't, though!

The only way you can tell the Mustang isn't real is the way the material drags a little. It has a slightly sticky feel to it, but it feels exactly like skin once you add lube or lots of spit. The head is much larger and more pronounced than I expected, but the softness keeps it from catching on my pubic bone (something I loathe). I think it will be enjoyable anally, but we haven't had time to try that out yet. I was worried the veins would be uncomfortable, but you can barely feel them. The bottom of the base is surprisingly hard, almost like a firm plastic type of feel. The square VixSkin logo is stamped on the top of the base, but it's barely noticeable. I was concerned that the extreme curve of the shaft would be so drastic it would be uncomfortable or fake-looking, but that's not the case at all. Once you strap this guy in, gravity seems to pull him almost straight. Even in cowgirl position, it doesn't feel as wickedly curved as it looks in the pictures or on my nightstand.

In my opinion, this toy is the most fun when it's tucked into a pair of jeans or when using a RodeOH harness. It's so realistic, it feels almost disrespectful to put it into a flashy leather harness! If you really want a harness, I recommend something sexy but minimalist, like Commando from Aslan or Leather Strap Rider.

Speaking of size, here's how Mr. Mustang measures up (diameter/circumferece, in inches):

Because this is a 100% silicone toy, care and cleanup is pretty easy. I'm the only one using it, so I wash it with soap and warm water. You can boil it for a few minutes to sanitize it or just stick a condom on it if you're going to use it on more than one person. And as always, be very cautious with silicone lubes and other silicone toys! Always test the silicone lube on the bottom of the base first, and make sure the Mustang doesn't touch any toys that are only partially siliicone, such as jelly toys. When in doubt, store it in a bag or a separate drawer/container. We usually use water-based lube, but this toy is so realistic we might try some improvised situations using cooking oil or vegetable shortening. Just remember, oil is not compatible with latex, so avoid mixing oil and condoms. Several people have told me that you can dust cornstarch over the Mustang to avoid scratches and tears during storage, so I'll definitely be giving that a try.
Experience
So far, here's what we've found works best:

I wash the Mustang in very hot water while my partner puts on her harness/RodeOH/jeans. I put the Mustang straight into the O-ring or underwear and immediately drop to my knees to suck on it. Since VixSkin retains heat, it feels incredibly real! I usually like to have my girlfriend grab my hair and force my head down, because I'm kinky like that. When the Mustang is nice and wet, I lean forward on something (couch, table, counter, bathtub edge) and let her take me-- handcuffs optional. The vaginal muscles are always tighter when you're being taken from behind, so the position is great for a realistically sized toy like this one. It also works best for most anal play, in my experience.

My Mustang tags
About author