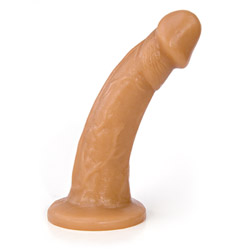 Save a horse, ride a cowboy

Uh, because it's Vixskin, that's why. Vixskin is incredibly realistic and, as someone who doesn't even like dicks, is super duper fun to squeeze.
Pros:
Realistic feel
Realistic look
Fun colors
Anal-safe
Cons:
Realistic look
Rating by reviewer:
5
No votes for this review
Vixskin Mustang feels like the real deal. At 6 1/2″ long and 1 5/8″ of girth it’s not large but it’s still filling. If you want something as realistic as you can get without chopping off a real dick, this is the toy you’ll want.

I’ve had the Mustang in my possession for about a month now and I have been putting off writing a review. Not because I’m lazy (I so am) but because I wanted to LOVE this toy (that’s right, I said love in all caps). While I don’t love it like some other sex bloggers, this toy is still pretty awesome.

Perhaps I would have forgiven the lack-of-girth-feeling if it was, say, tie dye or lime green . I have the Mustang in Carmel color, much too realistic for my taste. However, this is perfect for lovers of realism. The Mustang has foreskin (which is awesome) and veins protruding around it’s core as well as a penile raphe, which completes the look. Seriously, if it didn’t look so pretty and living I’d be worried Burlesque Toys commandeered someone’s real penis.

I’ve never felt a toy like the Mustang. Vixen Creations invented VixSkin, which feels like as close to a living, pulsing cock as you can get. It’s much more fun to flex around the Mustang, to feel it give slightly but keep firm enough to stimulate me. It has a dramatic curve that should be good for g spotting but it did not provide the stimulation I needed to call it a g-spotter. Perhaps it’s because it was too flexible and my picky g-spot needs firm pressure, as does the g-spot of many women. The lack of g-spotting success aside, as a fill-me-up dildo, the Mustang does a fairly adaquate job.

Although I’m not officially a size queen, I didn’t feel like the Mustang was quite girthy enough compared to, say, the Cadet. The Cadet actually has the same stats that the Mustang does but because it’s a firmer silicone it feels significantly girthier. Because the outer bit is squishy The Mustang sports a solid inner core and a softer, silicone outer core. This toy is waterproof. It has a flared base which means it is anal safe (woo hoo!) and can be used in conjunction with a harness. It is 6 1/2″ and has 1 5/8″ of girth, making it not quite enough for a size queen but plenty for a woman (or man) who wants to feel filled but not stretched.

The packaging was a circular tube with a removable top. What appears to be the front has Vixskin’s logo and the back it says, “Treat like your own skin, handle with care.” I wasn’t sure what they meant by that but after a hard fucking I found that the dildo was still in one piece. The packaging declares the materials to be “platinum silicone” and assures the reader that it is a non-porous toy. There are a few ways to clean it: boiling it for three minutes (don’t let it touch the sides of the pan!) or wash it with soap and water.
Experience
Quite enjoyable, good toy for a warm up, or for those of you with vagina's and/or buttholes that don't like girth.
This content is the opinion of the submitting contributor and is not endorsed by EdenFantasys.com

My Mustang tags
About author