Wand Fit For A Queen

The head of the Hitachi is made of textured rubbery material. It has a little bit of give, but is mostly firm. Due to the type of material, it is porous. Don't worry about it being rubberized material - it has almost no odor at all. It has no taste beyond a vague plasticy-rubber taste.

The body of the Hitachi is made of smooth plastic, and is quite solid.

The design of the Hitachi Magic Wand is, as I put it earlier, deceptively simple. I find it to be elegant - it does exactly what it is designed to do, and it does it VERY well. No more, no less.

The Hitachi is big. It is about as big as my forearm, and measures 1 foot long (without its cord). I find the cord to be mostly adequate, but that all depends on how far your power outlet is from the wall. One of the downsides of the Hitachi is that, as a tradeoff for its sturdiness and immense power, it is not cordless or waterproof. It is not discreet at all, and due to the size and weight I wouldn't recommend it for travel.

The Hitachi is heavy. I didn't have a scale around, but it feels as if it weighs upwards of 2 pounds. This would be due to the fact that it is very sturdy and, based on what I've seen of one being taken apart, contains a lot of metal. You could probably use one of these as a baseball bat and it would still be functional (I wouldn't recommend it, though).

And, finally, the Hitachi is LOUD. I would rate its noisiness at about the same level as a kitchen appliance. You can hear it through very thin walls or closed doors, and since it's not waterproof you won't be able to use the sound of a shower to cover up the noise. It's noisier than my egg beater or dishwasher.

Out of the box, the Hitachi Magic Wand provides two vibration intensities: Low (5,000 rpm) and High (6,000 rpm). When the switch is centered, the Hitachi is off. Pressing the switch to the left turns the Hitachi on high, and pressing it over to the right turns it on low. The high switch has a red dot, and the low switch has a white dot. And those are the controls - very simple.

The Hitachi must be plugged into an electrical outlet in order to use it. I use a simple lamp dimmer that I bought for $10 to provide more control over the vibration intensities. People who love the idea of the Hitachi but find it just a bit too powerful might try using a lamp dimmer, as you can reduce the intensity of the Low setting with the dimmer. I can't say if that potentially causes electrical damage or wear and tear on the Hitachi, or whether or not that voids the warranty, so do so at your own risk.

I can already tell that my Hitachi is going to last pretty much forever. This is a very solid, durable product.

The Hitachi Magic Wand is not waterproof, and was not specifically designed to be a sex toy. As such, you cannot wash it with soap and water or directly spray it down with toy cleaner. The head is rubberized, so it is not as nonporous as something like silicone or glass. Because of this, I would recommend cleaning it immediately after use. Since the head is too large to cover with something like a condom, you may want to use a silicone cap or attachment if you plan on sharing with a partner, as it would be next to impossible to properly disinfect the head itself. You may wish to use a silicone cap anyway, if you're really worried about making sure your toys are completely sterile.

Because it is so large, you probably won't be able to store it very discreetly. I put mine in its box and put it under my bed.

My Hitachi came in a box with a picture of the Hitachi on the side, and several photos of people using it on themselves as a muscle massager. The box was also wrapped in plastic wrap. The box is not discreet, but it does loudly proclaim that it's a MUSCLE massager, and who is really going to go, "So... do you hold that against your clit?" Scratch that, actually, I know a few people who would. Either way, it's still not blatantly a sex toy and it does work really well as a body massager.

It doesn't come with any sort of case to store it in, but keeping it in the box works just fine for me. Even better since it's one of those "hide in plain sight" type deals, if your friends or parents are particularly clueless (or just too embarrassed to ask about it).

The Hitachi comes with an instruction booklet outlining its (non-sex-toy) use and care, and a warranty card.

Before I acquired my Hitachi from Edenfantasys, I attempted to buy one over the internet from a different seller. This led to a bad experience - apparently, counterfeit Hitachis are enough of a problem that there are websites dedicated to educating people on how to tell if their Hitachi is a fake. I took several pictures of the fake I was sent as well, so that you can see what a real versus what a fake Hitachi looks like. 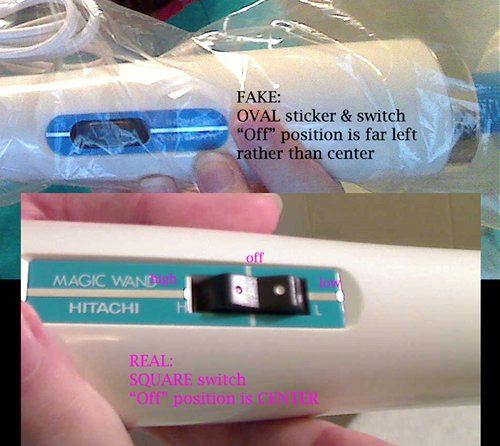 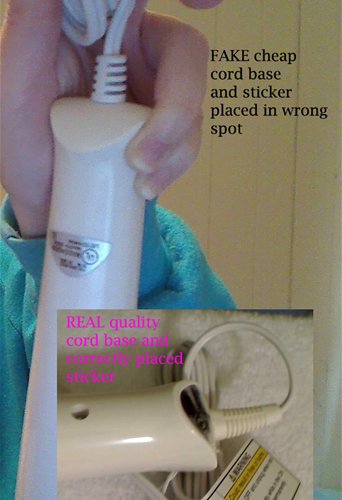 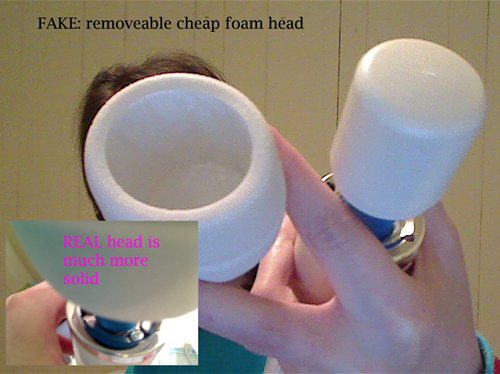 Note the screw in the base of the real Hitachi, and that the fake Hitachi lacks one. A fake Hitachi is much lighter than the real thing, because a real Hitachi is very solid. It is also balanced differently - a lot of the weight of a true Hitachi is focused in the head. To make things more confusing, the box of the fake Hitachi was Photoshopped with the actual fake Hitachi, which made it look even more legitimate! If I were not a vibrator snob, I may never have known the difference. The real tragedy is that the fake Hitachi I was sent had nowhere near the heft or quality of the real thing, which means there are people out there who may have been disappointed by what they thought was a Hitachi Magic Wand when what they received was not an actual Hitachi Magic Wand. I at least got a refund and apology, though.

A fake Hitachi does not come with a warranty card. The one Edenfantasys shipped me came with a nice, big warranty card tucked into the instruction booklet. Don't buy a Hitachi from somewhere you don't trust to send you the real thing. I should have ordered mine from Edenfantasys in the first place.

By this point, I've tried a lot of different vibrators. My very first vibe was a rabbit vibe that I purchased about 8 years ago. That one didn't wear out - I got tired of it and got rid of it. I've since owned a variety of vibrators ranging from personal massagers to bullets to rabbits and g-spot vibes... however, I had never owned a Hitachi. I wanted to see if it was worth the hype, so I finally caved and bought one.

I'll admit by now that I am power-hungry and that's what drew me to the Hitachi. My favorite vibrators include the Silly Diver and Salsa, just to give you an idea of the range I like. Generally, I like pinpoint vibration so I wasn't so sure about the Hitachi. But I also have an achey back, so I figured it wouldn't be money wasted.

The Hitachi came in a plain, no-nonsense box. Even though it's plain, the box doesn't look "cheap". I immediately noticed that the Hitachi was fairly heavy. It was wrapped in plastic, which I quickly tore off. I carefully inspected it - due to the aforementioned bad experience I had - and was satisfied that it was the real thing. I then set it aside for a while, as I had other products to inspect and test.

I first used the Hitachi as an actual muscle massager, and it felt heavenly. I have an "ouch" spot on my back that has been there forever, and neither masseuses nor chiropractors have been able to do anything for it. Sometimes it gets so sore that I can't even touch the skin above it. I was able to apply the Hitachi to it, though, and it didn't hurt! That spot is still sort of sore, but after steamrolling it with the Hitachi a few times it definitely hurts a LOT less than it used to. One of my friends is very envious of my Hitachi, and I've found myself recommending it as a muscle massager (if anybody decides to use it for something else behind closed doors, well, that's none of my business).

I used it for its other purpose a while later. The first time I used it, I just used it on its own. Normally, I prefer pinpoint vibrations but I was in a different mood. But whoa, it is powerful! I wouldn't even dream of using it on high, and I'm glad I bought a dimmer for it. I can only handle it through fabric, and even then I prefer to brush it lightly across my clitoris... well, actually, my entire vaginal region as it's rather large. The vibrations are deep and rumbly in a way that I haven't experienced from a different vibrator (or anything besides sitting on a washing machine), which I found to be amazingly pleasurable. It didn't just stimulate my clit, it rumbled all along the length of my vulva and perineum. It was like a vaginal massage.

I like to play with using vibrators on my partner's penis, but I don't think I'd use the Hitachi on them without using an attachment to either muffle or direct the vibrations. It's just too powerful. Grinding against the Hitachi during intercourse, though, is a different story - the vibrations are so strong and rumbly that both of us can enjoy them! I haven't tried a p-spot attachment on a partner, but I could see one being really fun.

The next time I tried it, it was with a silicone attachment that allowed for insertion. I enjoyed that as well, and the attachment helped muffle and direct the vibrations. I'm not sure, though - I kind of like the broad rumbliness of the Hitachi alone. I think that when I find the right g-spot attachment, though, I'll be in heaven.
This product was provided at a discounted price in exchange for an unbiased review. This review is in compliance with the FTC guidelines.