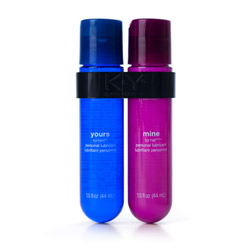 Definitely not mine, nor hers

I would like to say I was glad we tried it, but we weren't. Maybe right for your body chemistry, but definitely not right for ours.
Pros
Very cool idea, cool packaging.
Cons
Sticky, bad sensations.
Rating by reviewer:
1
useful review
We decided on a trip to the store to give this a try. We saw all the commercials on TV and thought the idea that there were separate lubes to give both of us enhanced pleasure, sounded like genius! The fact that you could pick it up at the drug store, the grocery store or other retailers we thought was fabulous. We also really appreciated the sex positive advertising.

Definitely not worth it. First, the cooling/menthol. Neither of us liked it. Then there was warming sensation sensation and that was even worse. Maybe it's just our body chemistry, but neither of the sensations really made us want to do anything. We gave it a go, but both ran to the bathroom to wash it off in a couple of minuets. The other thing that was awful was the stickiness. Yeah, the lubrication works, but with this awful sticky feeling. I have to say, we were genuinely excited and really felt let down.

The other thing that was kind of bizarre, was the packaging design. You can't stand up the tubes in anyway that is easy, to store. If you don't keep them in their holder, they roll all over the place. Trying to get lube out was a little hard and seemed to get all over the tubes, which then become pretty darn sticky. We really liked the packaging, it's very coupley, but it would seem, and especially for the price, that they would be able to deliver the lube in a more friendly way to get at it.

Now I have a couple of friends who swear by it, and maybe we'll give it a try down the road again, though I don't know if she will let it anywhere near her vagina. For now, I think it's just going to sit in the back of the toy drawer.
Follow-up commentary   I still don't like it 2 months after original review
So, I brought it up to the misses that maybe we should give it another try. We rubbed a little bit on our fingers, felt the stickiness, smelled the weird chemically smells, and she looked at me and said "this is going nowhere near my vagina." After that, it went into the trash. I have to say, it felt pretty liberating throwing it away.
This content is the opinion of the submitting contributor and is not endorsed by EdenFantasys.com

Reviewed by Lucky21 (Eden Advanced reviewer)
Rank
5.7
wrote 27 reviews
This review was edited by
Comments
Make a post
Forum
Thank you for viewing K-Y yours and mine – lubricant review page!
Top